Hulk Hogan is trying to clear his name by suing his ex-wife Linda Bollea after she accused him of having a gay fling while they were married and physically abusing her. 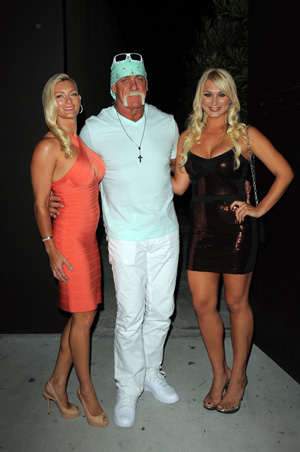 What’cha gonna do, brother, when Hulkamania runs wild on you? Pro wrestler Hulk Hogan is using his own famous catch phrase to clear his name after his ex-wife Linda Bollea’s shocking allegations in her memoir, Wrestling the Hulk: My Life Against the Rope.

Hogan filed papers against Bollea last week, accusing her of defamation after she said he physically abused her and had a gay fling with wrestler Brutus Beefcake.

“After the four-year crazy divorce I thought I’d heard everything I could hear in the courtroom,” he told Us Weekly. “Then, all of a sudden she says I abused her, that I was violent. She told everybody that I was a homosexual.”

“If any of that was true, I would admit it, and [if] I was a homosexual I would embrace it. It’s just so crazy to hear, so I have a real problem with it… If you’re going to say I’m something that I’m not to try to ruin my career and my livelihood… I have to answer her back,” he said.

Hogan goes on to say that the accusations are “ridiculous.”

“I don’t mean to laugh about it, because it’s not funny. But it’s insane. It doesn’t make any sense to me,” he said.

He married Jennifer McDaniels (pictured on his left, while his look-alike daughter Brooke is pictured on his right), one year ago and says he is enjoying his new life. “I’ve moved on with my life, things are great again,” Hogan said. “I know what it’s like to be happy again.”