Kim Kardashian’s BFF, Jonathan Cheban, was attacked over the weekend with a baking ingredient. No, really. 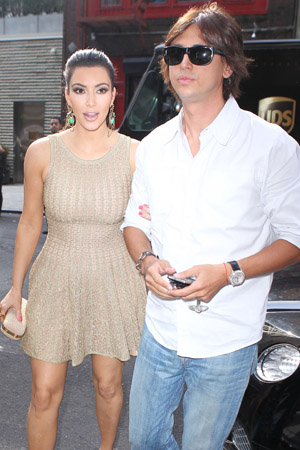 Jonathan Cheban is ditching New York City for a few days after someone chucked flour at The Spin Crowd star outside Kim Kardashian‘s DASH store in SoHo, according to TMZ.

“This is for Kris Humphries!” an unknown man said before throwing the “flour bomb” on Cheban, according to the gossip website.

The assailant was referring to the tension between Cheban and Kardashian’s ex. The reality star is said to be considering a lawsuit against Humphries for calling him a gay slur while cameras were rolling during filming of Kourtney and Kim Take New York.

Naturally, Cheban was not pleased.

“I think it’s pathetic that someone would go to this length to show their support for someone,” Cheban told Us Weekly. “With fans like that, who needs enemies?”

He’s said to be concerned for his safety — he even beefed up security after the Humphries feud went public. However, Humphries wants to make it clear he had nothing to do with this incident and doesn’t condone it.

“[Kris] would never condone hateful and unacceptable behavior like that to anyone, in any situation,” his rep told TMZ.

A “flour bomb” sounds pretty funny, but it’s no laughing matter to the celebrity publicist and his famous friends.

“Can you believe how crazy people are?” Cheban added to The Huffington Post. “I am disturbed and embarrassed that people still act like this.”

“This might seem funny but it was very scary,” a friend added. “This time it was flour but next time it could be someone much more dangerous. Throwing white powder around in New York City is no joke.”

Kardashian and her friends have been the subject of much hatred and scrutiny since she announced her divorce on Oct. 31: Over 200,000 people have signed a petition to take the Kardashian’s off of television and singer Michael Buble even called her a b***h during a concert.