Despite the worst ticket sales in recent history, New Year’s Eve beat a still-strong Twilight and Jonah Hill’s R-rated comedy The Sitter. With all those celebrities, we expected no less from this romantic comedy ensemble. 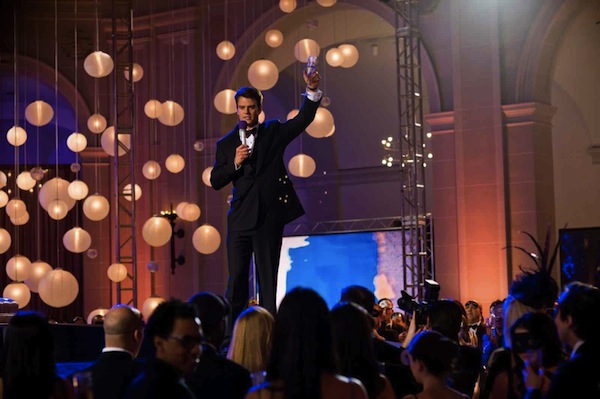 This weekend tracked some of the most dismal movie ticket sales since 2008, although the ensemble romantic comedy New Year’s Eve celebrated a victory by taking the No. 1 spot at the box office.

Earning an estimated $13.7 million — much lower than expected for cast list that included everyone from Academy Award-winning Hilary Swank to veteran actor Robert De Niro — New Year’s Eve is about couples, singletons, moms and daughters trying to make their end-of-the-year dreams come true on the last night of the year.

Directed by Garry Marshall (Pretty Woman, Runaway Bride), the film is a follow-up to his other successful ensemble Valentine’s Day which took home $56 million its opening weekend.

Coming in second at $10 million, The Sitter had a soft start. The R-rated Jonah Hill comedy about a slacker who ends up babysitting three unruly kids for an evening underperformed. Hill typically pulls in bigger bucks when it comes to an opening weekend. Get Him to the Greek yanked $17 million, and Superbad raked in $33 million their opening weekends.

The Twilight Saga: Breaking Dawn — Part 1 proved its not an acquaintance to be forgotten, coming in third at an estimated $7.9 million. The film’s total gross tops an impressive $259 million.

Kid movies took the next few slots, demonstrating that families love going to the movies together, typically around the holidays. The Muppets ranked fourth with $7 million, Arthur Christmas ranked fifth with $6.6 million and Hugo ranked sixth with $6.1.

Charlize Theron‘s indie comedy about an aging ex-prom queen who returns home to try to win her ex-boyfriend back from his wife and baby, Young Adult, disappointed with only $320,000. Tinker, Tailor, Solider, Spy, also new this week, lagged behind with a dismal $301,000.

The cold weather, holiday shopping and timing (Thanksgiving movies might have soaked up everyone’s box office trip for a few weeks) might be to blame for the box office lag.