The Amazing Race came to a finish Sunday night with Ernie and Cindy taking home the $1 million prize.

The Swan House in Atlanta played host to The Amazing Race’s big finish Sunday night, but landing in first wasn’t the easiest of tasks for Ernie and Cindy. 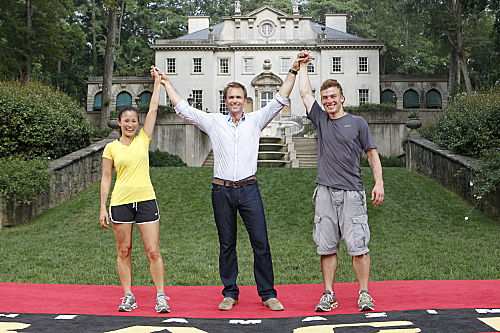 Ernie Halvorsen and Cindy Chiang of the Windy City flew from Panama to Georgia to begin their triumphant win, but there was much more in store for the engaged couple.

The Chicago couple then had to land a Learjet in a flight simulator, work with a clue that traced back to the author of Gone With the Wind and use a giant billboard above Turner Field to display and map out this season’s race.

Ernie and Cindy had stiff competition in dating couple Jeremy Cline and Sandy Draghi who hail from California and managed to come in second after a small setback in a furniture store.

Poor husband and wife team Amani and Marcus Pollard couldn’t handle the simulated landing and wasted some time. Did we also mention they are from Georgia? Yeah, the hometown team couldn’t pull through and took third place.

In the end, Amani said it didn’t matter as long as you “never quit.” It’s no wonder these two had been fan favorites — they have got so much spirit!

So, what are Ernie Halvorsen and Cindy Chiang going to do with that amount of money? Start a foundation, of course.

They told host Phil Keoghan they wanted to give back to some of the “impoverished” people they met during their time on The Amazing Race.

Did you catch The Amazing Race‘s season 19 finale? Head over to our comments section and sound off — did the right team win?