The first trailer for Sony’s Men in Black III has arrived. Mark your calendars film buffs: “The Galaxy Defenders” are back in theaters May 25. 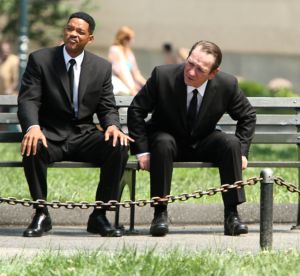 A big ’90s blockbuster is headed back to the silver screen: Barry Sonnenfeld’s Men in Black III will be released in 3D on May 25, 2012.

Will Smith and Tommy Lee Jones will lead a cast that also includes Josh Brolin and Emma Thompson as Sony’s hit action franchise prepares to return to theaters for the first time in 10 years.

The first trailer for Men in Black III was unveiled online over the weekend.

Film fans can expect a major plot twist in the form of a little “time jumping” by Smith’s Agent J.

Here’s the set-up: Agent J and Jones’ Agent K are going about their usual alien monitoring business when Agent K takes on a side assignment solo.

When asked by J what he’s investigating, K cryptically tells him, “I promised you the secrets of the universe, no more.”

“Well, what other secrets are there?” J replies.

t
Cut to J asking Emma Thompson’s character, named Oh, to help him locate K. A bit surprised, she tells him K has been dead for decades.

Cue the time travel plotline: Desperate to find Agent K in the past, J “time jumps” back to 1969 and lands in an office chair, right in front of Brolin, who plays the young K.

On the edge of your seat yet? Sony is.

“Sony’s summer of 2012 will get off to a red hot start with an incredible new 3D adventure for the Men in Black,” Jeff Blake, the studio’s Worldwide Marketing and Distribution Chairman, said in a statement earlier this year.

“We couldn’t be more excited that the original filmmaking team responsible for the first two worldwide hits is reuniting for this third installment. We love where the story is taking Agents J and K and know this new chapter will deliver a fresh fun twist for fans of the franchise while also introducing the Men in Black to a whole new generation of moviegoers.”

The first two Men in Black films, released in 1997 and 2002, inspired an animated series and took in more than $1 billion in international ticket sales.