Now here’s something that certainly won’t help quiet those “Paris Hilton is a has-been” reports. The heiress invited cameras into her annual holiday party to take photos of… well, no one. 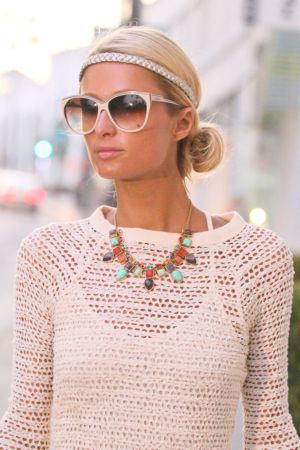 It’s her party and — well, you know the rest.

Blame it on the Kardashians!

The heiress hosted a bash called “Paris Hilton’s Electric Christmas” at her multi-million-dollar Mulholland Estates pad last week. She decked the mansion out with decorative lights and a tent, provided DJs and got all dressed up.

Sadly, there were no celebs around to enjoy all the action.

Apart from her kid sister Nicky, the most well-known guest was Hugh Hefner’s ex-girlfriend, Holly Madison.

We hear the lack of any notable faces was quite embarrassing for Paris; as was the fact that she was the only person on the dance floor for much of the evening.

Last May, the waif-y socialite you love to loathe returned to boob tube in the ill-fated Oxygen reality sudster The World According to Paris.

The program co-starred Paris’ now ex-main squeeze Cy Waits, her mother Kathy Hilton and Charlie Sheen’s crack addicted ex-wife Brooke Mueller — who happens to be Paris’ BFF. The season opener was seen by just 409,000 Americans, with only 274,000 of those in the coveted 18 to 49 demographic, according to the Entertainment Weekly.

Hilton’s July interview with ABC News‘ Dan Harris hit a sour note when the journalist dared to quiz the controversial docu-soap star about her waning star appeal and the dismal ratings for The World According to Paris.

During the interview, Dan asked Paris to share her thoughts on the increasing popularity of reality stars, like the Kardashians and the cast of Jersey Shore. He also probed the pop tart about the sad reality that her “moment” may have very well passed.

Well, let’s just say Paris didn’t like this line of questioning. So rather than entertain it, she looked to her handler, stood up and marched right out of the interview.

In October, Hilton’s show was axed altogether when ratings sank even lower in subsequent airings.