Fear Factor and Joe Rogan are back on television Monday night to creep out viewers nationwide, yet the returning host is giving thanks his path to success was slow and nearly crippled by failures. 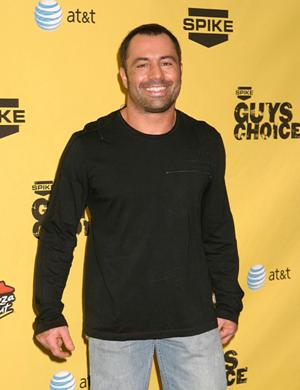 Joe Rogan is looking forward to challenging Fear Factor contestants with “bigger and crazier” stunts than ever before when the show returns Monday night. As an adult he’s happy to work in the entertainment industry, but he has only pity for child stars raised in the limelight.

In a recent interview with AOL TV Fear Factor‘s Joe Rogan shared his two cents on child stars, using Miley Cyrus as a prime example as one of young fame’s tragedies.

The 44-year-old said, “I watch Miley Cyrus talk in interviews — I really study her, from a psychological standpoint. This poor f*****g kid! What kind of a life is that? Sure, she’s got a ton of money. Yes, she’s not going to have to deal with the financial problems that a lot of people have. But my God, her character! Her mind! She’s delusional.”

Joe Rogan, who didn’t find mainstream success until snagging the Fear Factor host position in his 30s, continued, “Her perception of reality must be so twisted. They really do think that what they have to say is more important than what a ‘regular’ person has to say. The reason you hear a lot of famous people say a lot of really egotistical things or do really stupid s**t… your whole life is series of actions and reactions. ‘I show up at work everyday, and everyone kisses my a**.’ They develop thinking that is a normal part of life.”

Yet as much as Miley Cyrus’ mental state horrifies Joe Rogan, shows like TLC’s Toddlers and Tiaras really push him over the edge.

“Oh, I was once at a hotel in Dallas where they had this convention or contest, whatever the hell it was, and it was one of the creepiest g*dd**n things I’ve ever witnessed in my life,” the Fear Factor host said.

“The hotel was filled with little girls with f*****g make-up on and high heels. I have daughters, so it creeps me out even more. I looked at those people like, ‘This is sick. You’re turning these little girls into sex symbols.’ Those parents… what f*****g social misfit freaks they are.”

Do you agree with Joe Rogan’s take on Miley Cyrus and child stars?