Buxom blonde Jessica Simpson has inked a deal with Weight Watchers to shed the pounds after she gives birth — and she’ll pocket a cool $3 million to do so. 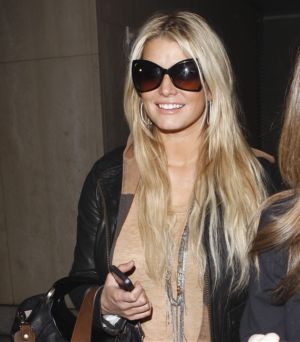 Jessica Simpson’s baby bump has resulted in a big bundle of dinero for the billionairess fashionista.

The news comes just a month after the star’s reps pooh-poohed all talk of any such agreement.

Jess had been in talks to become the firm’s new face before she became pregnant earlier this year. Now she’s set to highlight her weight loss by following Weight Watchers’ healthy eating plan after she gives birth in early 2012.

The pop singer will have one year after giving birth to lose her baby weight and start plugging her hopefully “amazing” results.

“The deal is in place and after having her baby, she’ll start with Weight Watchers to lose her baby weight,” “Page Six’s” insider spills.

Simpson is the latest of a number of celeb moms to represent a weight-loss company, joining Jenny Craig ambassadors Melanie Brown and Mariah Carey.

“Pregnancy was meant for me — it really was. I can’t wait to have more kids,” the Fashion Star mentor told People last month.

“I love being pregnant. I have such an incredible connection with myself and with my body that I’ve never had before.”

The increasingly savvy businesswoman is currently expecting her first child with former NFL star Eric Johnson. The Weight Watchers contract means Jessica will be in perfect shape when she finally seals the deal with her baby daddy.

Simpson and Johnson were due to walk down the aisle last month, but postponed the wedding because the bride didn’t want a baby bump messing up her perfect wedding pics.

The pregnant star has vowed to wed after the baby’s arrival.