Police in Hawaii are on the hunt for the person who swiped a $5,000 Chanel handbag belonging to actress Lindsay Lohan — and took off with $10,000 hidden inside. 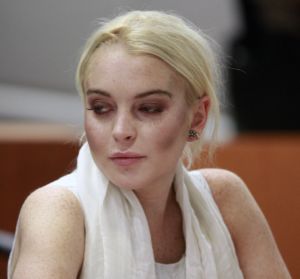 Police in Honolulu County, Hawaii have launched an investigation after a pricey handbag belonging to Playboy cover girl Lindsay Lohan was stolen — and later returned sans a whole lotta dough.

A $5,000 Chanel purse, containing Lohan’s passport, identification, cash and paperwork giving her permission to take a vacation to Hawaii while on probation, was reportedly stolen from a car parked outside a party in Laie on Saturday night.

The purse was returned Sunday afternoon, on the heels of reports that Lohan is due to appear before Judge Stephanie Sautner in a Los Angeles courtroom on Wednesday. If complications from her missing ID had prevented her from returning to L.A. in time for her scheduled probation progress report, Lohan could have been found in contempt of court and sent back to jail.

A “suspicious-looking” Hawaiian local produced Lohan’s missing Chanel bag after being interrogated by one of the star’s pals.

LiLo was so happy to have her beloved purse back, she didn’t even bother asking this strange man any questions about where he’d found it… despite the fact that she’s now out $10,000.

It’s all about the Chanel, darling.

Any of this sound remotely familiar?

This is the second time the star has experienced travel woes just before an important court date.

In May 2010, Lindsay was attending the Cannes Film Festival in France when she claimed her passport had been stolen. The actress was unable to return Stateside in time for a court hearing.

Have no fear, Gents: With her ID now safely tucked away in her suitcase, Lindsay will be back in the City of Angels just in time to unveil her Playboy spread on The Ellen DeGeneres Show Thursday.