J.Lo’s boy toy Casper Smart is causing a war between the star and her ex, singer Marc Anthony. Is Marc too fixated on Casper’s sketchy past? 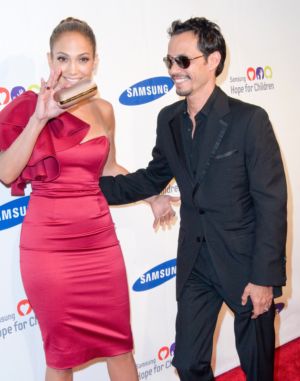 Jennifer Lopez’s May-December romance with a backup dancer nearly 20 years her junior could put the kibosh on her hopes for a “peaceful divorce” from Marc Anthony.

The salsa star has refused to work with the American Idol judge, 42, on their upcoming Latin American talent show, citing Jen’s new relationship with her younger man as the issue.

Lopez and Anthony are working together on ¡Q’Viva! The Chosen, a Spanish-language singing competition. Tabloid snitches say Jen wanted to bring Smart along as they filmed on location in Peru, but her estranged husband quickly vetoed the plan.

Anthony now says he can no longer work with her. She says he’s “very controlling and jealous.”

“There are millions of dollars on the line,” according to a pal of Anthony’s. “Marc’s pride has been seriously dented.”

“J.Lo is a very tough woman,” tittle tattles another source. “When she decides she wants something, she gets it. She’s keeping notes on Marc’s behavior as well as her voicemails that show his volatile temper.”

Well, no sooner had the gossip mags figured out the identity of Jennifer’s new squeeze, than they started digging up the dirt on him. And they found plenty — much to Marc’s chagrin.

Casper Smart (whose real name is Beau) was arrested in 2010 for drag racing down a Los Angeles freeway with a friend. He later had three warrants issued for his arrest after he failed to turn up at multiple court hearings related to the charge.

He’s scheduled to appear in court in January and could face jail time.

Smart faced a similar string of charges and warrants for speeding and driving on a suspended license back in 2006. He almost went to jail Lindsay Lohan-style for failing to complete his community service.

J.Lo dances with new man at the AMAs >>

Sources close to Casper tell In Touch magazine that he’s only dating Jen because he “wants to be rich and famous.”

“He’s a smooth talker and he obviously thinks J.Lo will be his meal ticket,” an insider tells the mag.

Marc and Jennifer — who have three-year-old twins, Max and Emme, announced their split in August. Lawyers for both sides are working through a “complicated” divorce settlement that could take months.

After all, there are two children, multiple homes, businesses and joint ownership of the Miami Dolphins football team to be considered.

“It’s complicated and it could be at least several more months before final terms of the settlement are agreed upon,” a source tells Radar Online.

Do you think Jen’s romance with Casper is bad for her image?