Khloe Kardashian and Lamar Odom will be making the big adjustment to living life in the Lone Star state after receiving the news Odom has been traded to the Dallas Mavericks. 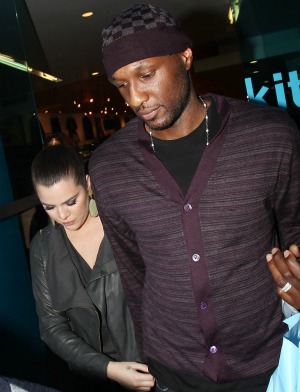 ‘Round and ’round he goes, where Lamar Odom lands nobody knows. Well, that’s not true anymore.

Nope, Khloe and Lamar will not be taking The Big Easy as previously reported.

Instead of heading to the New Orleans Hornets, Khloe Kardashian‘s hubby, Lamar Odom is off to Texas!

According to the New York Times’ Lakers blog, Lamar Odom has been traded to the Dallas Mavericks.

Why the New Orleans deal fell through isn’t completely clear at this time, but NBA baller Chris Paul was part of the original trade attempt as well.

The real issue now is how the Kardashian family is going to deal with this trade. They are a tight group and something tells us separation isn’t what they need at this time.

Khloe Kardashian’s quest for a baby >>

Khloe Kardashian took to her Twitter, writing a philosophical verse to express her feelings: “For I know the plans I have for u,’ declares the LORD, ‘plans to prosper u and not to harm u, plans to give u hope and a future.’ Jeremiah.”

She’s also laughed off rumors she was part of the reason behind the trade situation in the first place. “I am curious as to how I am the cause for any trade? LOL Some people just say anything behind their computer screen,” she wrote.

Does the Los Angeles girl think she’ll get along fine in Texas? “I am sure I will love it but I am a tad thrown off,” she tweeted.

She also wrote, “I know for a fact blessings are everywhere!!! Everything happens for a reason. God is great.”

Head over to our comments section and sound off about this trade!