The kids of McKinley are preparing to spread holiday cheer on Glee’s all-new Christmas episode.

It’s that time of year again, when chestnuts roast on an open fire and Glee puts their own spin on Christmas — ‘Tis the season, Gleeks! 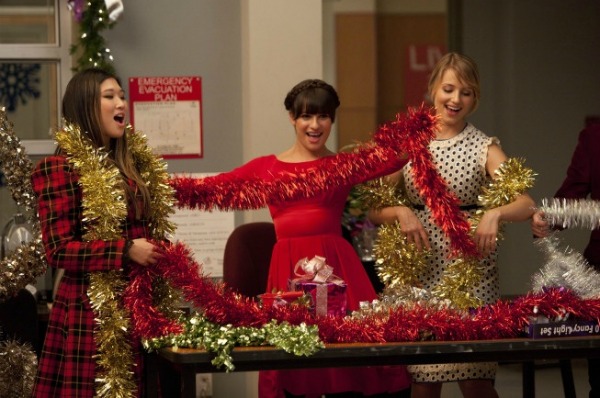 On this week’s all-new episode of Glee, “Extraordinary Merry Christmas,” the kids are pulling double duty with the New Directions having two gigs to perform at.

The more the merrier, right?

Check out a preview of “Extraordinary Merry Christmas” featuring the cast singing “Do They Know It’s Christmas,” then head back to Fox to watch the full episode Tuesday, Dec. 13…

Fox officially describes “Extraordinary Merry Christmas” as the following: “When New Directions is asked to perform at two different events on the same day, at the same time they have a tough decision to make. Will they choose correctly and spread Christmas cheer, or will their ambition get the best of them?”

Matthew Morrison, who plays glee club teacher Mr. Schuester, recently stopped by Jimmy Kimmel to talk about directing the episode and a very special guest star the cast welcomed to the set.

Morrison revealed, “We called up George Lucas, and he gave us Chewbacca.”

The Glee star added, “There’s only one guy who can officially be Chewbacca, and he lives in Northern California. They flew him in. We had Chewbacca for the day. It was just great. We were taking pictures with him. He’s been doing it for 12 years.”

Will you be sipping eggnog while watching the cast of Glee hang stockings and sing their favorite songs?