Jennifer Aniston is the hottest woman in the world according to one men’s magazine. Do you agree? 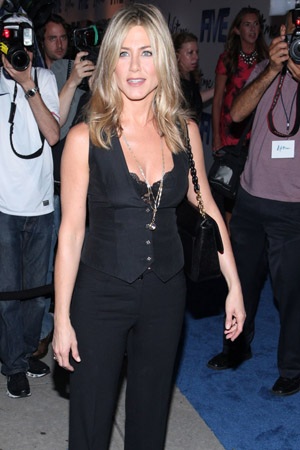 This will either please you, or really infuriate you: Men’s Health has named Jennifer Aniston the hottest woman of all time.

The girlfriend of Justin Theroux beat out a slew of other stunners, including tabloid arch nemesis Angelina Jolie and legendary screen siren Raquel Welch for the coveted title.

“Her down-to-earth persona makes her seem attainable, and anyone who’s seen her in Office Space has to admit she makes even pieces of flair look good. She rarely plays the airhead, and she seldom overplays a role: she’s funny in a quiet, refreshingly human way,” the mag writes in the article.

“And her all-too-human love life offscreen inspires sympathy that not even a string of bland romantic comedies can diminish. Other sex symbols drift toward one-dimensionality, becoming flat icons in the process, but throughout her career Aniston has remained sexy, funny and unmistakably real.”

We’re torn about this. Sure, Aniston has that sort of girl-next-door beauty that women love to copy. We love her style, career and laid-back attitude. However, she is not hotter than Victoria’s Secret Angel Miranda Kerr (number 41) or Halle Berry (inexplicably ranked at number 35).

Oh, and we’re not just going to pick on Aniston. Madonna makes the top 10, too.

“From shredded wedding dresses to cone-shaped bras, fascist military fatigues to, uh, absolutely nothing, being faithful to Madonna — who has sold some 300-million albums worldwide — is getting to love a million women at the same time, and that’s something we cherish,” they wrote of the Material Girl.

Tell us: Are we being too superficial? Do you think Jennifer Aniston is the hottest woman alive?