Lea Michele reveals that Ashton Kutcher was her dream co-star for her role in New Year’s Eve. 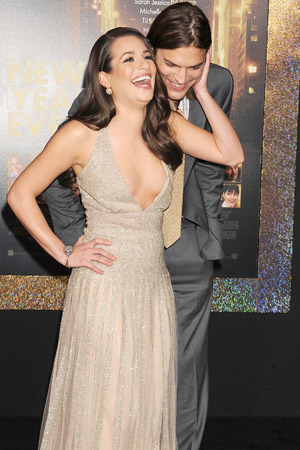 Lea Michele and Ashton Kutcher set off the rumor patrol when they got really, really close during the New Year’s Eve premiere earlier this week. Sources came out of the woodwork on Tuesday claiming that Kutcher is putting his claws in Michele as part of his Operation Ditch Demi Moore plan.

However, it may have been Michele that hatched the plan to get close to Kutcher. The Glee actress revealed in her New York magazine interview that she basically wanted Kutcher for her love interest in the film all along.

“Garry [Marshall, New Year’s Eve director] was like, ‘Who do you think is cute? What guys do you like? Who do you want to be in this movie with you?’ And I was like, ‘I don’t know, I’ve never been asked before!'” she said in the interview.

“I didn’t mention Ashton’s name just because, I gotta say, I kinda felt like he was a little out of my league. You know, this guy’s like, the hottest guy, and then when they called and said that Ashton was doing it, I was really freaked out. I thought I should have picked someone else and said, ‘You have to use this person!’ so I wouldn’t have been nervous. But I’m so glad, because he challenged me, and it was a really great pairing, I think.”

Awww. Sounds like someone has quite the crush. Scratch that, we pretty much know she does, based on a tweet she sent after the premiere.

“@aplusk it was such an honor working with you. I cannot thank you enough,” she tweeted.

It’s pretty adorable, but we hope they aren’t dating or getting busy because, well, he’ll break her heart.

“He totally loved Demi, but the whole time he was with her he always felt like he was in a state of restraint. He loves beautiful women and beautiful women love him, so he always had this feeling of being a kid in a candy store but only having access to one candy jar,” a source said.

“Splitting from Demi has been devastating, but now he’s starting to accept that it’s over and he’s trying to focus on the silver lining — which for him is basically a sex rampage.”

Do you think Lea Michele and Ashton Kutcher should couple up?