Adele has been named Billboard‘s Artist of the Year. Is she planning on a new release any time soon? Don’t hold your breath. Read on for details. 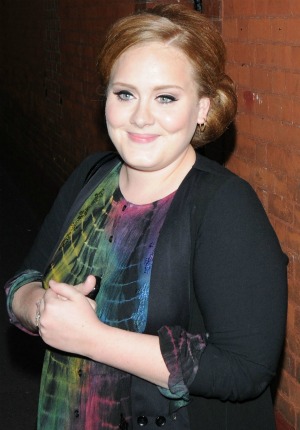 What a year for Adele! The singer is riding high on her successes including six Grammy nominations and making Billboard history. And now the soulful singer is basking in the glow of her success. But if you think that means she’s prepping her next album, think again.

The “Someone Like You” singer says she hasn’t written a single song for her follow-up yet — and she is not planning to for a while. In fact, while she recovers from throat surgery Adele plans to do a whole lot of nada.

“I’m really looking forward to some time to do nothing,” she told Billboard.com. “I imagine I’ll be 25 or 26 by the time my next record comes out, as I haven’t even thought about my third record yet. I’m just gonna lay some concrete, set up home and just ‘be’ for a bit. I’ll disappear and come back with a record when it’s good enough. There will be no new music until it’s good enough and until I’m ready.”

“When it comes to staying myself — my career isn’t my life, it doesn’t come home with me,” Adele explained. “So it’s a piece of piss staying grounded and not being changed by it. The same things I’ve always liked still satisfy me. My team’s the same and my group of friends are the same. Of course I’m bowled over by people’s response to 21, and when I meet artists I love, it blows my mind. But it baffles me as well. I go home and my best friend laughs at me, rather than going to a celebrity-studded party to rub shoulders with people who know me but who I don’t know. I’m Z-list when it comes to that sh*t.”

But just because she won’t have a new album out soon doesn’t mean we won’t hear from her. She expects to complete her recovery from vocal surgery by late winter and hopes to get back on the road ASAP.

“The surgery couldn’t have gone better,” she said. “But because I was singing with damaged vocal cords for three or four months and because of the surgery and because of the silence after the surgery I now have to build myself back up vocally. It’s gonna be a lot easier for me to sing now. And mentally I won’t be worried about my voice on stage anymore. So I have to get used to that. That’ll take most of January, so February I’ll be singing properly!”

We look forward to it!