Lindsay Lohan is on display for all the world to see, thanks to an early leak of her Playboy photos. 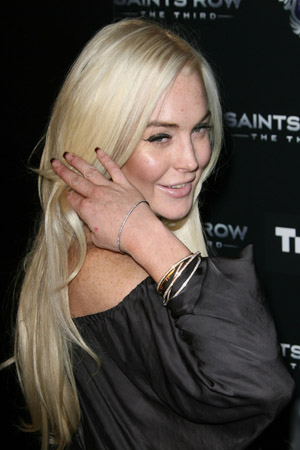 Lindsay Lohan’s full Playboy pictorial has leaked on the web — we knew it was only a matter of time after the issue’s cover leaked earlier this week.

Our verdict? Ehhh… Playboy paid a million bucks for this?

The set is reminiscent of Lohan’s many Marilyn Monroe-esque photo shoots of years gone by, including one that appeared in New York magazine in 2008. She even showed more skin in those pics — her nether regions are pretty covered in the Playboy nudes.

She does look pretty — though they airbrushed out her freckles and tattoos, as Gawker pointed out. We’re just having a hard time believing people are going to pay to pick up the issue now that it’s all over the internet.

Playboy seems happy with it, though.

Hef also announced they’re releasing the issue early since everyone is already seeing the photos.

“Because of the interest & the Internet leak, we’re releasing the Lindsay Lohan issue early,” he tweeted late Friday afternoon.

Lohan is still scheduled to debut the issue on Ellen next week, though we’re wondering if that will change, too.

“Lindsay has agreed to do one media interview during the on-sale period of her issue, and has chosen Ellen. Lindsay will not be doing any additional interviews to promote her pictorial,” her publicist said in a statement.

For now, Lohan’s busy being a little worker bee at the Los Angeles county morgue to fulfill her probation requirements.

Will you look at Lindsay Lohan’s Playboy photos?