The trailer for the book-inspired What to Expect When You’re Expecting has just been released — and you can see it here in all its star-studded glory!

Pregnancy is hilarious! As Jessica Simpson can tell you, it’s full of farting, ridiculous breasts and all sorts of other fun surprises. While many women turn to the classic advice book What to Expect When You’re Expecting, director Kirk Jones has transformed it into a film journey about what it’s really like to have your body taken over by another being. By the looks of it, it’s a barrel of laughs! 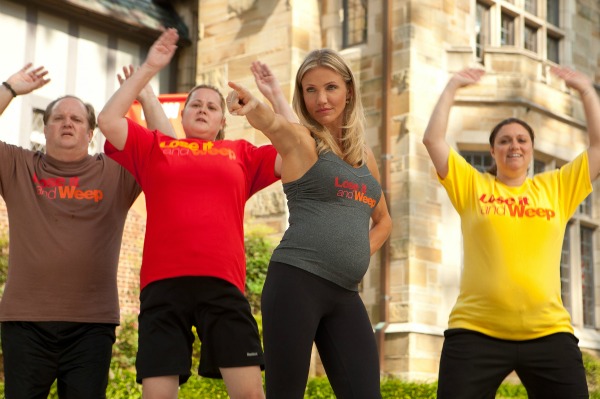 What to Expect When You’re Expecting: The official studio synopsis

Inspired by the perennial New York Times bestseller of the same name, What to Expect When You’re Expecting is a hilarious and heartfelt big screen comedy about five couples whose intertwined lives are turned upside down by the challenges of impending parenthood.

Over the moon about starting a family, TV fitness guru Jules and dance show star Evan find that their high-octane celebrity lives don’t stand a chance against the surprise demands of pregnancy. Baby-crazy author and advocate Wendy gets a taste of her own militant mommy advice when pregnancy hormones ravage her body; while Wendy’s husband, Gary, struggles not to be outdone by his competitive alpha-dad, who’s expecting twins with his much younger trophy wife, Skyler. Photographer Holly is prepared to travel the globe to adopt a child, but her husband Alex isn’t so sure, and tries to quiet his panic by attending a “dudes” support group where new fathers get to tell it like it really is. And rival food truck chefs Rosie and Marco’s surprise hook-up results in an unexpected quandary: what to do when your first child comes before your first date?

A kaleidoscopic comedy as universal as it is unpredictable, What to Expect When You’re Expecting finds humor and uplift in all the unexpected trials and triumphs of welcoming a child into the world. The film stars Cameron Diaz, Jennifer Lopez, Elizabeth Banks, Chace Crawford, Brooklyn Decker, Anna Kendrick, Matthew Morrison, Dennis Quaid, Chris Rock, Rodrigo Santoro, Ben Falcone and Joe Manganiello.

What to Expect When You’re Expecting: Watch the trailer

https://youtube.com/watch?v=9wuIltIHQXY
What to Expect When You’re Expecting hits theaters May 11, 2012 — just in time for Mother’s Day!