Tom Cruise did all of his own stunts in Mission: Impossible — Ghost Protocol. He also did his own comedy, as you can see in a new clip from the film.

Oh, that Tom Cruise is such a persuasive guy, especially when he’s wearing a tank top. At least that’s the impression we get while watching this new clip from Mission: Impossible — Ghost Protocol. 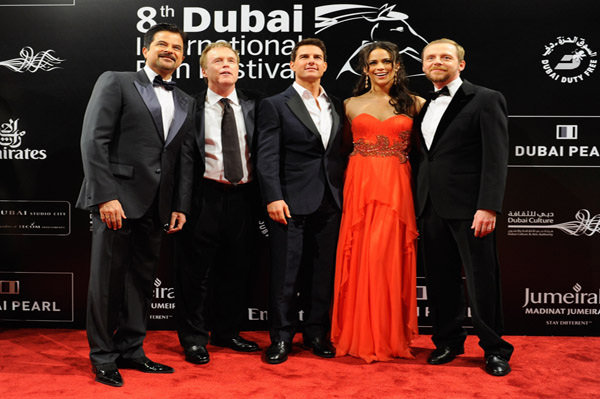 We don’t really have a lot of context for this clip yet – except that Simon Pegg’s character, Benji Dunn, really wants Ethan Hunt (Cruise) to go to the extraction point. Ethan is characteristically defiant and stands there until Benji gives in.

Have to love a bit of comedy in an action flick, right? Let’s be honest, though: We just want to see MI –Ghost Protocol to see Cruise’s death-defying scenes and rippling biceps. The husband of Katie Holmes is all too happy to oblige — he did his actions scenes himself!

“Not falling!” Cruise joked to Access Hollywood when asked what his mission was during stunts on the Burj Khalifa in Dubai. “I want to entertain an audience, and I think people see and feel the difference.”

So, was Holmes worried about his stunts on the world’s tallest building?

“No, she knows that I train and prepare. I couldn’t do it without her, without my family’s support,” Cruise said. “She’s very supportive.”

The buzz behind this installment of the Mission: Impossible franchise already has people asking about another film. Cruise isn’t so sure he’ll suit up again. “I just want to get through this one,” said Cruise. “And then we’ll all sit down and talk about it. I love this franchise. It’s so fun to work on.”

Are you excited for the movie?