Getting naked with Charlize Theron was a nightmare says her Young Adult costar Patton Oswalt. Read on to find out why! 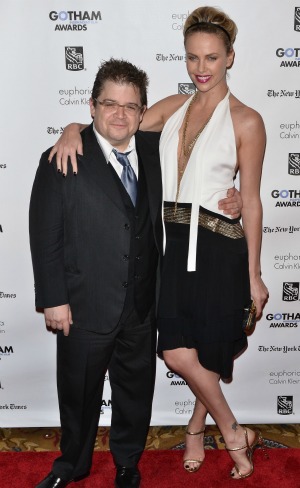 Think any man would love to get naked with Charlize Theron? Think again. Her Young Adult costar Patton Oswalt says the experience was utterly traumatizing.

“Why do I have to be in my underwear next to the most physically perfect person on the planet? Why couldn’t I have been next to John Goodman or Michael Moore in their underwear?” said Oswalt at the premiere of Young Adult on Thursday. “It was a dream that turned into a nightmare.”

In fact, the only thing Oswalt said he took away from the scene was a bad case of post-traumatic stress disorder.

“Every time I hear a car backfire, I think I’m getting naked again,” he joked.

The Jason Reitman-directed film was written by Diablo Cody — she of Juno fame — and features Theron as an emotionally-stunted teen lit writer who returns to her hometown to reclaim her now-happily married high school sweetheart. When things don’t go as planned, she hooks up with Oswalt’s character Matt Freehauf, who has his own high school issues to deal with.

After being badly beaten as a teen, Freehauf must wear a brace. Oswalt said he prepped with a physical therapist so he could move out of his body and get into the moment with Theron.

“I just wanted less and less to have to think about so I could be more present in the scenes with Charlize,” he told CTV News. “She’s a really instinctual actor and I really didn’t want to be sitting there with eight other thoughts on my head while she’s just rolling with it.”