Sinead O’Connor thanks her fans for their well-wishes after her quickie Vegas wedding. 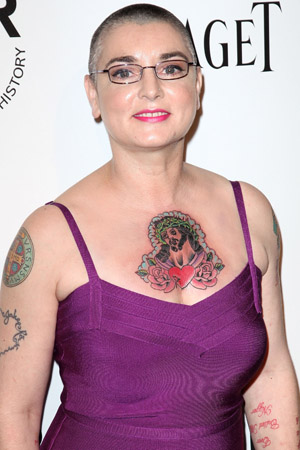 Singer Sinead O’Connor married on Tuesday in the natural way for Irish musicians: In Vegas!

“Dear friends… amongst whom I include whomever may be reading this with a view to writing about the glorious marriage,” she wrote on her website.

“Am blogging this cus [sic] media people are naturally seeking me. On Sunday I will put up blog on whole day. Too glorious for words,” she continued, along with a graphic hint about what the couple is doing in their post-wedding bliss.

O’Connor married Irish therapist Barry Herridge, 37, on the night of her 45th birthday. The couple toasted the marriage with a pink Cadillac so the wedding lived up to the “rock and roll” style she wanted.

The couple met earlier this fall after the thrice-divorced singer put out a call for “sex-starved men” on her blog. She said that Herridge was the clear winner.

“Barry sent me this wonderful email, which just took my heart away,” she told the Irish Independent before the wedding. They met in a coffee shop and “talked for hours” before deciding to get hitched.

O’Connor looked much like her “Nothing Compares 2 U” days during her wedding, rather than the frumpy look she was spotted with over the summer. Happiness has a way of changing a person’s outlook!

The big question: Why Vegas?

“I’ve been married before, but I’ve never had my dream wedding in Vegas. I wanted to do it there because it’s casual, quick, not religious and, most of all, very romantic,” she said.

“People always complain, ‘you never invited me to your wedding,’ but I prefer casual weddings. I’m so happy.”

“At first I didn’t know what she was doing, and then I realized she was playing hopscotch. It wasn’t Sinead but a businesswoman in a suit and in her 30s, just having a bit of fun,” he told the newspaper.

“I wondered why more women that age weren’t doing the same thing? And it struck me that this was exactly what Sinead was doing with her search for love, having fun, and I told Sinead about this woman in my first email.”

“I love Sinead more than anyone I have ever met, or anybody I will ever meet. I am going to look after her,” he added.

Call us crazy, but this one might just work!