Angelina Jolie says telling her actors to get naked and make out in her new film In the Land of Blood and Honey was harder for her to say than it was for them to hear. 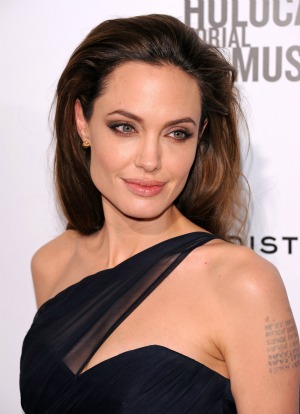 Angelina Jolie has played plenty of risqué characters in her career. So why was it so hard for her to direct her actors in one little love scene?

Jolie said that telling her cast to take it all off for In the Land of Blood and Honey made her extremely uncomfortable — but her stars, Zana Marjanovic and Goran Kostic, didn’t seem to care.

“I believe it was Zana’s first love scene and Goran is a family man with a wife and kids. You kind of suddenly feel this strange thing of asking people to participate in anything like that because they’re not a real couple,” Jolie told USA Today.

“You find out how strange this is to ask anybody to get naked together and put a camera on them.”

“They actually made me more comfortable. I was being a lot more prudish.”

Why the reluctance? Jolie said she sometimes “felt misrepresented” when she took her own clothes off on screen.

“You feel, ‘Why did they hold on to that and why did they feel they needed to do that?'” she said.

Jolie’s own steamiest nude sex scenes include takes from The Good Shepherd, Foxfire, Original Sin (in which it is alleged that she and Antonio Banderas actually had sex), Taking Lives and Gia.