Uma Thurman is slated to make a splash on NBC’s Smash. Keep reading for the details. 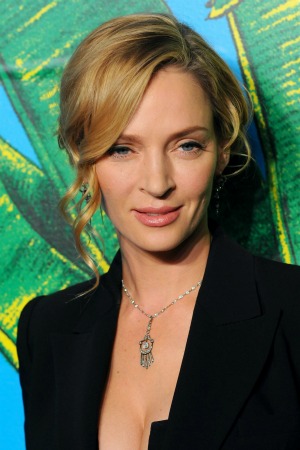 We’re waiting to see how Smash stacks up against Glee and with the news that Uma Thurman has just landed an important story on the NBC newbie, there might be some competition.

TVLine is reporting Uma Thurman has been added to Smash in the multi-episode role of a “famous and somewhat difficult movie star.”

Thurman’s character will toy with the notion of being the star-player in the musical that’s within the TV show Smash titled, Marilyn.

Smash is really banking on top-notch talent to make the NBC midseason show a hit.

Will the star-power lineup bring in the ratings? Uma Thurman can’t hurt, but we’ll have to wait and see.

This would mark Uma Thurman’s first big TV gig in quite some time.

While we do wonder if there will be any competition between Glee and Smash, but honestly, it’s like comparing apples to oranges.

Smash tends to come off as an adult-oriented show that just so happens to have big musical numbers for a purpose — it’s a show that has a Broadway musical within it.

Glee is obviously for the younger crowd and their musical showdowns seem to just pop up when the emotion calls for it, or they’re competing for titles.

Check out the trailer for Smash below…

Something tells us there will be room for both shows to thrive. All though, Glee seems to be a bit down in numbers lately rating wise.

We want to know — will you be checking out Smash? Head over to our comments section and sound off!