Lea Michele revealed her real name to Jay Leno and said she changed it after mean girls started calling her “ Lea So-fatty” and “Lea So-farty!” 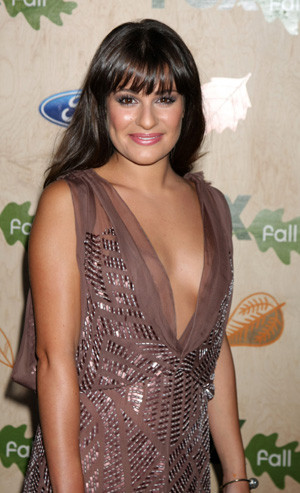 Glee star Lea Michele may have a hit TV show, a designer wardrobe and be at the top of every magazine’s “it” list, but that was not always the case. The 25-year-old star said that she changed her last name after she was bullied in high school.

“Sarfati. That’s my real last name,” Michele said on the Tonight Show with Jay Leno on Wednesday. “I don’t use it a lot because I got Lea So-fatty, Lea So-farty at school.”

She said she changed her name on a whim at an audition. “When I was little and I went on my first audition they were like, ‘And may we have your name,’ and I was like ‘Lea Michele.’ And I’ve been Lea Michele ever since, ” she said.

Leno asked if Sarfati was Italian, and Michele said it was “Sephardic, which is Spanish-Jew.”

“We’re from Spain, got kicked out,” she joked on the dual origins of her name.

Michele is appearing in the movie New Year’s Eve and revealed some of her interesting traditions for the holidays. She said when ringing in the New Year, she and her mom wear the color that will evoke the feelings they want for the upcoming year. “If you want to be in love, you wear red,” said Michele, who broke up with her boyfriend in September.

Other interesting traditions? “We eat 12 grapes. Don’t ask why,” she said. “Right as the clock is counting down, we write down a wish, burn it and then drink the ashes in champagne.”

She said that one stopped after they figured it was not so good for their “digestion.”

Another tradition she won’t be partaking in? Eating fish on Christmas Eve. “I’m a vegetarian so I don’t partake in it,” she said, adding that it is “really smelly.”