Kevin Federline found out the hard way — the heat in the Outback of Australia is not for everyone. 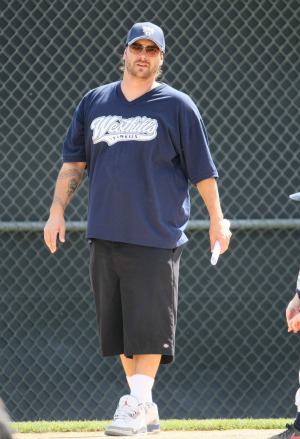 Kevin Federline just can’t get control of his weight.

The father of Britney Spears’ children is taking part in the Australian version of Celebrity Fit Club and the heat proved to be a bit much for the overweight celeb, as he passed out due to the heat.

He first appeared on the American VH1 version in 2010 to shed some pounds the public clearly saw he had gained.

Federline is back on the Australian version, Excess Baggage, after gaining back the 30 pounds he lost in 2010, but during the filming in Australia, he collapsed.

According to a report from E! News with details displayed on OMG, 33-year-old Kevin Federline recently fell prey to the heat in Outback Western Australia, which is part of the Kimberley region.

According to the report, the area is “widely regarded as one of the most remote and hostile parts of the country.”

A medic advised Federline be “taken to a hospital as he was showing signs of heat stress.” Don’t worry, everything is fine now and he’s back to filming.

We just have to say, the oddest things happen to this man when he does a weight loss show. Remember on the American version when he dramatically ran from a pack of dogs as part of a weekly challenge?

It sure lit a fire under his butt.

Excess Baggage is slated to premiere on Australia’s Nine Network in 2012.

Did you follow Kevin Federline’s first attempt to lose weight on VH1’s Celebrity Fit Club? Watching him try and make peace with Shar Jackson on the show was awkward and entertaining all at the same time.

Do you think despite a temporary set back on the set of Excess Baggage, Federline will lose the weight and keep it off?