In a shocking X Factor elimination, 13-year-old powerhouse Rachel Crow was sent packing from the FOX talent show on Thursday. Crow’s exit followed an explosive decision by judge Nicole Scherzinger. Will the increasingly unpopular Pussycat Doll be the next star sent packing?

But only one went home. 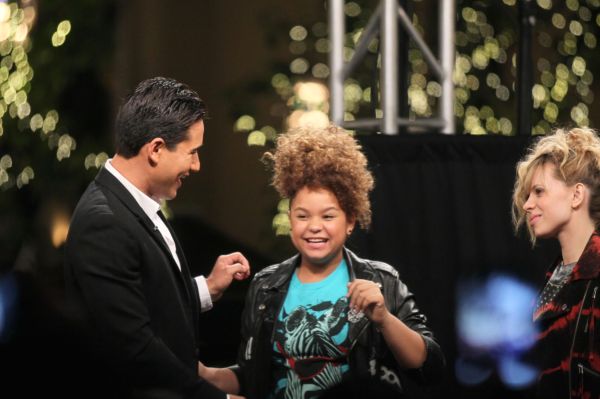 Both Crow and Canty found themselves in the bottom two, but it was fan-favorite Rachel who was eliminated after the four judges deadlocked over the singers’ “save-me songs.”

Marcus belted out a version of “I’m Going Down” by Mary J. Blige, who performed earlier in the night. Rachel sang “I’d Rather Go Blind” by Etta James.

When it was time for the judges to cast their votes, Simon Cowell threw his support behind his protégé Crow. Paula Abdul concurred.

L.A. Reid, on the other hand, sided with his charge, Marcus, one of the show’s two least-favorite acts three weeks running.

Former Pussycat Doll Nicole Scherzinger was given the deciding vote. But she had a difficult time choosing between the two contestants on the chopping block.

“I can’t make this decision because… I know how it feels and I love and adore both of you. I have to go to deadlock,” the singer cried.

Nicole then voted for Rachel to go home, tying things up two votes each.

“I’m gonna — I don’t wanna… send you home Rachel, I just don’t wanna, so I’m — the act that I’m gonna have to send home is Rachel,” Nicole said, immediately eliciting boos from the audience.

“That means the judges lose their power and we look back at how you at home voted. The act that got the lowest amount of votes will be leaving the competition,” Jones explained. 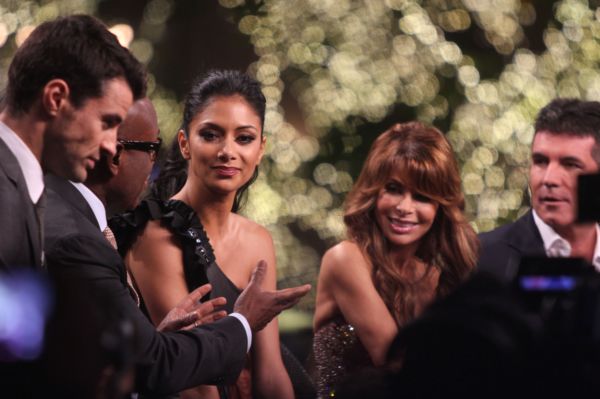 Rachel, 13, collapsed in a fit of tears upon learning that she’d been taken out of contention for the X Factor grand prize: a $5 million recording contract.

The audience jeered and booed Nicole as the young girl dissolved into sobs.

Crow eventually composed herself and told the audience, “I love you so much, everybody, for voting for me and thank you for giving me this because without you I am nothing. I hope this is not my ending. I know it’s not and I will go so far. I promise you!”

Cowell added, “She went out on the highest she could have gone out. We’re going to be hearing a lot more from Rachel Crow, I can give you my word on that.”

When asked by Steve if she wanted to make any comments, Nicole turned away after being booed by the crowd.

Last week, Scherzinger helped rally another mob of angry fans when she and Abdul kicked teen singer Drew Ryniewicz off the show. Both women were on the receiving end of death threats and vicious commentary on Facebook and Twitter over their controversial decision to instead keep Canty in the competition over Drew.

According to British weekly Now Magazine,  Cowell is mulling a possible casting swap that would send Scherzinger — originally tapped as an X Factor co-host — back to the show’s London faction. X Factor UK judge Kelly Rowland, a former Destiny’s Child girl bander, would then replace her on the Los Angeles-based show.

“Simon thinks [Rowland] will be amazing on the US show,” said an insider, who noted that Scherzinger has had a “mixed reaction in the U.S.”