Salma Hayek says as a child she prayed to Jesus for boobs — and obviously those prayers were answered in the affirmative! 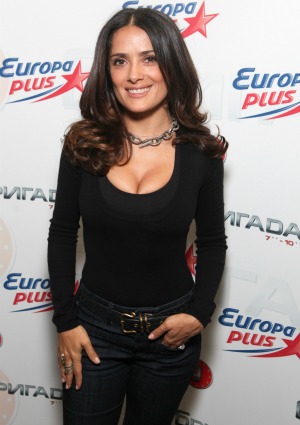 Actress Salma Hayek is known for her fabulously curvaceous body — and she says we can thank Jesus for that.

The actress, who voices Kitty Softpaws in the new animated film Puss in Boots alongside Antonio Banderas, says her greatest physical asset came courtesy of a little old-fashioned praying.

“I was the youngest in class and all these girls were starting to get them [breasts] and I wasn’t getting anything — I was really scared,” Hayek explained during an appearance on The Graham Norton Show in Great Britain.

“I was getting teased a lot because everyone was older and I was the skinny tomboy.”

“I went to a church that had a saint that was supposed to do a lot of miracles. I put my hands in the holy water and went: ‘Please Jesus give me some boobs.'”

Read our review of Puss in Boots on SheKnows! >>

Ask and ye shall receive, it appears.

Hayek actually explained the story in slightly greater detail back in 2007.

“My mom and I stopped at a church during a road trip we were making from our home in Mexico,” she said during a press tour for Ugly Betty.

“When we went inside, I prayed for the miracle I wanted to happen. I put my hands in holy water and said: ‘Please God, give me some breasts.’ And he gave me them! Within a few months, I developed a growing spurt, as teenagers do, and I was very pleased with the way I grew outwards.”

Ladies, if you are considering breast enlargement surgery, you may want to take a trip to your local Catholic church first and see if you can save yourself $10,000. It’s worth a shot.