See how Meryl Streep embodies Margaret Thatcher in the new trailer for The Iron Lady.

Is there anything Meryl Streep can’t do? The second trailer for her new film, The Iron Lady, hit the web today — and it shows exactly why Streep is the best female actress of her time. 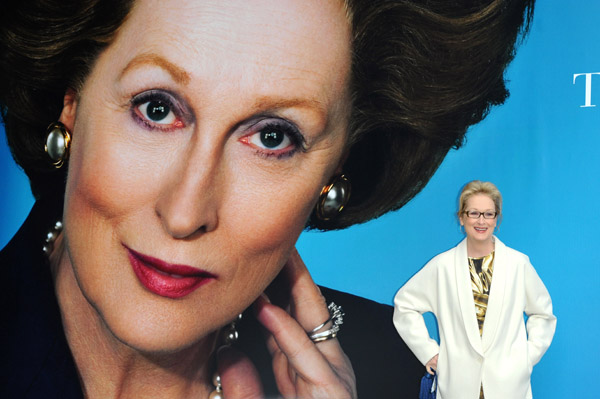 In The Iron Lady, Streep portrays Margaret Thatcher as she rose through the ranks of the British Parliament to become the country’s first — and only — female prime minister. The film is being touted as an extremely intimate tale of Thatcher’s life.

Streep’s portrayal of Thatcher is already bringing talk of an Academy Award. However, she’s not worried about that yet. Instead, she hopes The Iron Lady will inspire people to look beyond someone’s age and realize there’s a colorful past there.

“A whole huge life lay behind all those wrinkles and those seemingly non-descript, forgettable [women],” Streep told the audience during a New York City screening earlier this week. “There is nothing less exciting in our consumer society than an old lady, [but] the whole panoply of human experience is in there, to just imagine that — that’s what I would hope [when people watch this film].”

“We’ve all had that moment where you can’t remember why you went upstairs and so it was extrapolating that feeling of disorientation, momentary as it is,” she told the BBC.

“I wanted to capture whatever it was that drew people to her or meant people have a special venom for her,” she added.

Watch the new trailer for The Iron Lady

Do you think this will get Streep an Oscar?