Jonah Hill plays a slacker reject trying to get to a party, woo his almost-girlfriend and buy some cocaine — all while babysitting three kids — in new raunch-com The Sitter. 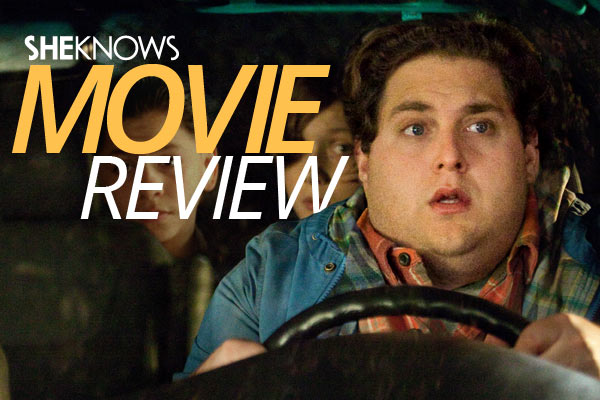 After years of therapy and a cleaner police record, Jonah Hill might be just the guy you’d want to watch your kids. In this raunchy, offensive adventure-com The Sitter, the 28-year-old actor plays a character who does everything wrong — but still a few things right — when it comes to babysitting three kids.

But don’t think this endorsement comes without a little criticism. Jonah Hill’s character is definitely not like Elisabeth Shue’s — an upstanding babysitter who considers the children above and beyond — in the 1987 comedy Adventures in Babysitting. Nope. He’s quite the opposite. He’s never really had a job, he has a recent DUI and for all intents and purposes, he hates kids.

But unless he helps a friend with a babysitting dilemma, his lonely mom might not be able to meet the doctor of her dreams. So, it’s clear from the get-go, our hero does have a heart, although not much confidence nor direction in his life.

This, paired with three kids — a melancholy 13-year-old who pops more Xanax than a Real Housewife (played by Max Records), a pre-teen celebrity-wannabe (played by Landry Bender) and an adopted pyromaniac from South America (Kevin Hernandez) — only makes matters worse.

This is Superbad‘s Jonah Hill 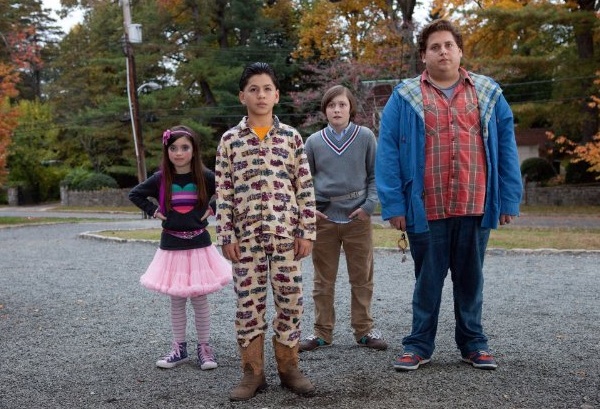 Clueless, witty and somehow lovable, Jonah Hill fits the role perfectly. This is pre-weight loss Jonah Hill, Superbad Jonah Hill, the one we adored in a handful of other ranch-coms like Knocked Up and Get Him to the Greek. If you enjoyed those films, you’ll like this, although we lamented not seeing the softer side of Michael Cera as a bestie and the camaraderie of Seth Rogen.

Oh, and his almost-girlfriend is at a party and she really needs him to pick up some drugs and meet her there in order for her to take their relationship to the next level. Ari Graynor plays the solipsistic girlfriend. We’ve seen her in What’s Your Number?, and here she’s deliciously selfish. Perfect for the role.

Our favorite part of the movie, Kylie Bunbury, plays Hill’s adorable love interest — the girl he should be with. She’s sweet, beautiful and an astronomy freak just like him (every nerd’s dream!). If only he could see things from our point of view.

Moms, hold onto your car seats. The next 81 minutes will make you extremely uncomfortable. But maybe that’s the fun of this movie? Seeing your worst nightmares as a mother come true? For some reason, the audience loves watching someone do something we think is 100 percent totally and completely wrong. Why? Because it’s funny.

It’s amusing to watch Hill’s character mess up, time after time after time. Maybe it’s the way he handles the fumbles — getting dropped on his ass, yelling out a sarcastic line or generally just doing the worst possible thing to get himself out of a situation he caused by his own stupidity.

So, what does Hill’s character learn through all of this? How to deal with three kids who need him almost as much as he needs them. Who knew this raunch-com would have a warm and fuzzy moment? It’s in there, you just have to look for it!

Don’t get me wrong, I could barely watch these kids riding around without wearing seatbelts, despite the scenes where they run from detonating toilets and fighting kickboxing champions. Yep, there’s lots of mayhem in this film. But if you like the fun, over-the-top comedies like Superbad, Get Him to the Greek and Pineapple Express, this is a movie for you.

If you’re afraid your car seat might come unbuckled when you’re making a 25 mph U-turn, you might want to pass on The Sitter.

Bottom line: Jonah Hill plays a slacker who corrupts minds, hearts and children with his raunchy, self-deprecating, but also very truthful outlook on life in The Sitter.