Octomom Nadya Suleman has launched a new venture! Every Sunday you can now watch the mother of 14 in the OctoTV web series.

Nadya Suleman, known widely by the nickname Octomom, is bringing in some much needed cash for her family of 14 children by filming weekly episodes for a new web series titled OctoTV. Just what will one of the most hated people in America be sharing with the world wide web? This, that and a bit of parenting advice. 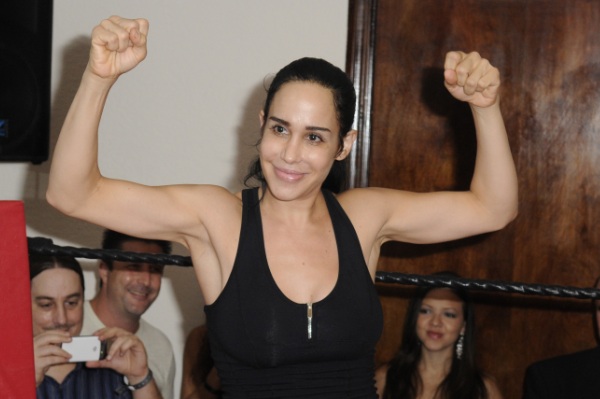 A message on the brand-new YouTube channel reads, “Welcome to OctoTV. This is Nadya Suleman but you all know me as ‘Octomom’. Now the tables have turned and I am running the show, tune in as I will be hitting on parenting, fitness, diet, nutrition, shopping on a budget and all those crazy rumors… LIVE from my home!”

The 36-year-old, pictured above just prior to her celebrity boxing bout, has reportedly signed a six-figure deal for her weekly show. The money will presumably go to help pay for the house Suleman and her 14 children live in, which she has been at risk of losing numerous times.

Nadya Suleman’s oldest child, a boy named Elijah, is 10, while the octuplets will celebrate their third birthday on Jan. 26. Their names are Noah, Maliyah, Isaiah, Nariyah, Jonah, Josiah, Jeremiah and Makai. All eight share the middle name Angel and Nadya’s last name, Suleman.

The mother of octuplets and six other children says in her first video, “I do everything by myself. I’m a great caretaker of 14 kids… I’m a type ‘A’ personality — workaholic, and there’s really nothing I won’t do, in regard to providing for my family.”

Check out the preview of OctoTV here:

Will you be tuning in to watch Octomom Nadya Suleman’s ‘OctoTv’?