Taylor Armstrong has a new book coming out about her struggle with domestic abuse — and says she didn’t feel safe speaking out until her husband was dead. 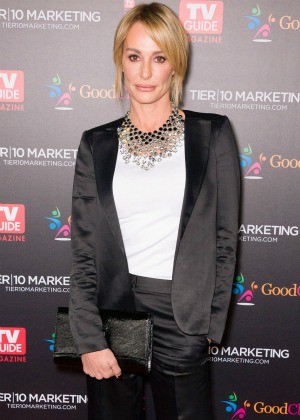 Taylor Armstrong has a story to share — one that she says she barely lived to tell. The Real Housewives of Beverly Hills star breaks down the abuse she suffered at the hands of her late husband Russell Armstrong in her upcoming memoir Hiding from Reality: My Story of Love, Loss and Finding the Courage Within, but she says she never could have so much as spoken about her ordeal while her husband was still alive.

“I wish I would have been able to tell my story before now,” Armstrong said in a statement to ABCNews.com Thursday. “But, until my husband Russell’s suicide, I didn’t feel safe to tell anyone for fear of my own safety and the safety of my daughter. With Russell’s passing, I now feel safe to bring my story into the light, to help all battered and abused women, and men, and aid them in their struggle.”

Russell Armstrong was found dead in an apparent suicide by hanging in August. Taylor discovered his body.

“I discussed my book Monday night for the first time on Bravo’s Watch What Happens Live,” she said. “The overwhelming response from viewers and their outpouring of support has been gratifying. From the bottom of my heart, I believe if my book can help others find the courage to deal with the pain and fear of their abusive relationships, I will have made a real difference in their lives.”

On last week’s episode of Real Housewives — taped before Russell’s death — Taylor flipped out on Camille Grammer for revealing the abuse in her marriage on camera. The now-widow believed that Russell would seek physical retribution against Taylor and their daughter over the revelation — in fact, she has even said she was afraid Russell would take her and little Kennedy out then kill himself.

“That puts my daughter in danger, I can’t get past that,” Taylor said on the episode. “She is the catalyst to a lot of things that haunt me — that could have hurt me, that still could hurt me very badly.”

Taylor Armstrong’s book is due in stores in January.