Tony Award-winner Hugh Jackman has shed his clothes for a good cause. The song-and-dance man returned to Broadway and raised nearly $1 million for charity. His secret? He took off his shirt!

Hugh Jackman has a big heart and an even bigger fanbase. The Australian actor led the pack in this year’s Gypsy of the Year Competition, which benefits the Broadway Cares/Equity Fights AIDS charity. 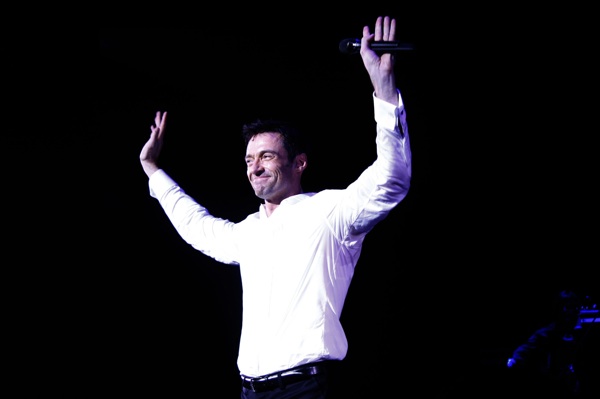 Jackman’s stage show, Hugh Jackman, Back on Broadway has been a massive hit at the box office. As a participant of the Broadway Cares/Equity Fights AIDS fundraiser, it’s become one of the biggest contributors for 2011. According to The Hollywood Reporter, this year’s drive raked in over $4.8 million, besting 2009’s record $4.6 million.

Overall, 53 Broadway, Off Broadway and national touring companies collected funds for the charity. In only three weeks (of the six-week campaign), Hugh Jackman, Back on Broadway raised a stellar $857,740. How did he do it? The actor shed his clothes for the audience. Jackman raised most of the money by auctioning off undershirts he wore during the show. These everyday garments fetched an unbelievable $10,000 and up!

On Tuesday, Jackman was honored for his work at the annual Gypsy of the Year event. He recieved a rousing ovation and humbly thanked his production crew, dancers and everyone else who had a part in making Back on Broadway a success.

Another big earner this year was How to Succeed in Business Without Really Trying, which was headlined by Harry Potter star Daniel Radcliffe. The musical raised $325,935, while the comedy The Book of Mormon brought in a respectable $315,968.

Broadway Cares/Equity Fights AIDS was founded in 1988 and has raised over $195 million to benefit people living with AIDS, HIV or HIV-related illnesses.

Despite his action-star persona, Jackman is a music man at heart. He previously appeared on stage in 2003’s The Boy from Oz, which earned him a Tony Award for Outstanding Actor in a Musical.