Amber Portwood has a new man in her life — and it’s not her baby daddy Gary Shirley.

Amber Portwood is a busy girl these days: When she’s not beating girls down at the IHOP, she’s spending time with her new boyfriend. 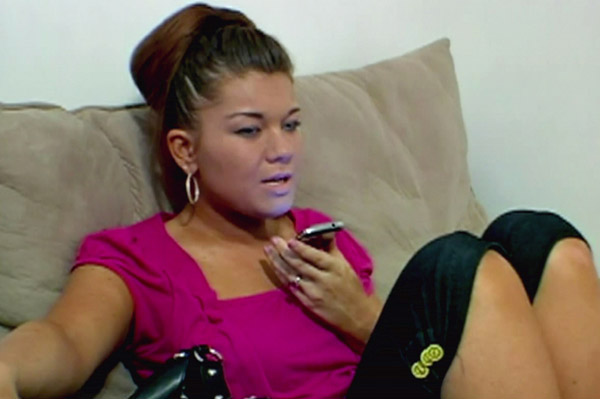 “He’s a gorgeous man. We haven’t spent a day apart since we met,” Portwood told E! News of her new boyfriend of one month, Mike. “He’s different than any of my other exes. I always knew I wouldn’t be with Gary for the long term. But with Mike, I know he’s The One. We never fight. He balances me out.”

Portwood, 21, said she was initially nervous to introduce Mike to her daughter.

“Mike has never dated someone with a kid before, so I had to really judge him before I introduced him to Leah,” she said, “He didn’t really know what to do, and I kind of had to show him. But then Leah started playing with his toes and drawing snow angels on his carpet and she took to him right away and he was great to her.”

He was with her when the incident happened at the pancake chain, but Portwood said they were provoked.

“I was with Mike, and yes, we did go have a couple of drinks,” she said. “But I was not drunk. We were sitting by ourselves, laughing and talking and my legs were up on his, just having a good time. Suddenly, I hear this couple make these racist comments.”

“I looked over and said, ‘Excuse me, but why are you starting drama? Please do everyone a favor and keep your comments to yourself,'” she said. It continued, “So that’s when I got up and told her to shut her f**king mouth.”

And what about Gary Shirley, her baby daddy and sometimes boyfriend? She says they’re finally in a good place.

“We’re getting along fine, not fighting,” she said. “Everything is finally good.”

The mom of Leah, 3, said her stint in rehab earlier this year helped her confront her personal problems.

“I was diagnosed with bipolar disorder three years ago. I struggle with it. I hate it. I grieve over it,” she said. “When I went to rehab for two months, they diagnosed me with dissociative disorder too, which makes me black out. People don’t understand what it’s like.”

Here’s hoping she stays on the up-and-up.