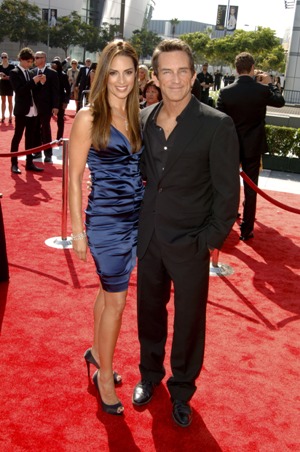 The newlyweds have each said “I do” once before. Jeff Probst was married to psychotherapist Shelley Wright from 1996 until 2001, while Lisa Ann Russell tied the knot with actor Mark-Paul Gosselaar in 1996. The pair, parents of 7-year-old son Michael and 5-year-old daughter Ava, divorced in 2010.

Lisa Ann Russell made her first public appearance with Jeff Probst just two months after filing for divorce. Despite the short time between the end of her marriage and the debut of a new relationship, a rep for Lisa and Mark-Paul Gosselaar insisted there was no third party involved in the their decision to separate.

The newlyweds are pictured here at the 2011 Primetime Creative Arts Emmy Awards on Sept. 9. Not only has Jeff Probst taken part in two weddings as the groom, he’s officiated a few! The 49-year-old was ordained as a minister by the Universal Life Church in 1999. The Survivor host has performed marriage ceremonies including the 35th anniversary vow renewal of his own parents and the nuptials of Jenna Fischer, star of The Office, and Lee Kirk.

Up next for Jeff Probst, along with his new role as step-father of two, is the Survivor: South Pacific finale airing Dec. 18 on CBS. Once the “outwit, outplay, outlast” victor of season 23 has been named, Probst will host the show’s 24th season, then switch gears to debut his self-titled talk show.

Due out in fall 2012, CBS said in a statement the show “will cover topics that will range from relationships and family issues to newsmakers of the day.” Jeff Probst added, “I’m fascinated with people. And I love adventure. I can’t wait to bring these two worlds together in daytime, and the added bonus is, I get to continue with Survivor in prime time.”