Former Illinois governor Rod Blagojevich is going to prison for 14 years after being convicted of corruption charges. 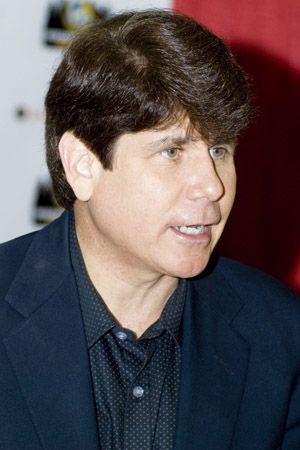 He begged for lenience in his sentencing, but said he had to “be strong” and accept responsibility. “I caused it all, I’m not blaming anybody,” Blagojevich said. “I was the governor and I should have known better and I am just so incredibly sorry.”

“Whatever good things you did for people as governor, and you did some, I am more concerned with the occasions when you wanted to use your powers… to do things that were only good for yourself,” U.S. District Judge James B. Zagel during sentencing.

“When it is the governor who goes bad, the fabric of Illinois is torn and disfigured and not easily repaired,” Zagel added. Blagojevich is the fourth Illinois governor to be sentenced to prison within the past four decades. His predecessor, George Ryan, is currently is serving 6 1/2 years in an Indiana federal prison for corruption.

The sentence — though long — is not what prosecutors wanted. He faced 15-20 years in federal prison for his 17 convictions. “In numerous recorded conversations, Blagojevich can be heard directing the criminal activity,” they wrote in court documents. He stood to earn at least $1.6 million for Obama’s Senate seat, though defense attorneys argue he didn’t receive a penny.

Blagojevich juror tried an Oprah excuse to get out of trial >>

“The current situation for his family is dire,” the defense wrote to the judge before sentencing. “He has lost his career and reputation. His family is close to bankruptcy. He has suffered every kind of public ridicule and humiliation.”

There’s one bright spot for the former politician, though: He won’t spend the holidays in jail — he’s not scheduled to start his sentence until mid-February.

Hope 14 years in the pen is worth getting on Celebrity Apprentice.

Do you think Rod Blagojevich’s prison sentence is fair?