The child molestation case against former Penn State assistant football coach Jerry Sandusky gets more disgusting and sinister by the day. The disgraced coach was arrested Wednesday morning after two more victims came forward with their tales of abuse. 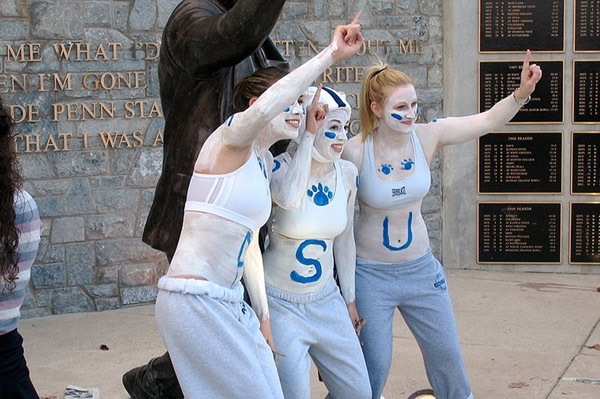 Sandusky’s new charges revolved around two more boys who said they were abused after meeting the coach through his Second Mile charity. One victim — now an adult — alleges that the coach met the boys and asked for their phone numbers. Sandusky later gained his parents’ permission to mentor him and took him to his home. The victim painted a chilling portrait, claiming that the coach kept him in the basement for entire weekends and forcibly raped him.

He said he cried out for help, hoping Sandusky’s wife, Dottie, would hear them. She never came downstairs. The other victim said the coach brought him to his Pennsylvania home and performed oral sex on him, among other sex acts.

The two new charges come after the retired coach was charged with 40 counts of sexual abuse on Nov. 5. He was free on bond, but is now in jail on another $250,000 bond.

Hopefully he’ll stay there so he cannot give more skin-crawling interviews. Sandusky tried to explain his case to reporter Bob Costas during a phone interview after his first arrest, saying that he “enjoys young people.”

He gave another interview to the New York Times last week.

“They’ve taken everything that I ever did for any young person and twisted it to say that my motives were sexual or whatever,” he told the Times. “I had kid after kid after kid who might say I was a father figure. And they just twisted that all.”

However, his words seemed to indicate something else. “I think a lot of the kids really reached out for that,” he said of their roughhousing and wrestling.