Katherine Heigl reveals her personal struggle in the new issue of ELLE. Does that mean she’s changing who she is? Nope! 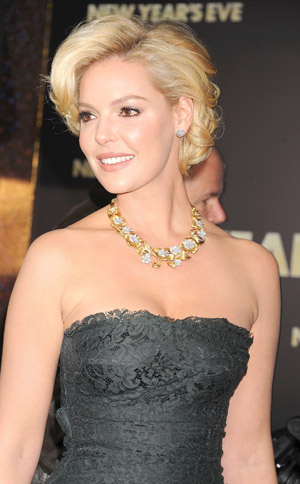 New Year’s Eve star Katherine Heigl is fully aware that she’s not thought of as the “girl next door” by movie fans. Instead, she’s known for her on-set tantrums and other behavior that helped her gain a reputation as one of the “difficult” starlets.

However, Heigl doesn’t want to be that girl — she wants people to like her.

“I’m just that a**hole who really wants everyone to like me, and it’s a ridiculous goal and it’s an impossible goal. But I think if I just keep pushing forward and showing myself through and through, they will see me again for who I really am and not what has been sort of spun about me,” the adoptive mom tells ELLE in her January 2012 cover interview.

She does acknowledge that she doesn’t fit the mold of what people might want — or expect — her to be.

“I’ve never really been America’s sweetheart, but for a minute I think that’s what they wanted me to be. And I had ’em for a second thinking maybe I was. And then I opened my mouth, and it was very clear I wasn’t. There’s so much of my mother’s caustic, sarcastic, irreverent take on things. But I also love and embrace it,” she said.

We love her unapologetic attitude. It’s refreshing in an industry filled with perfect actresses with their perfect little lives — cough, Gwyneth Paltrow, cough — to see someone who isn’t afraid to show her Type A personality.

And we don’t think she’s a b*tch — she just knows what she wants, a trait that she picked up from years of struggling in Hollywood.

“The first five or six years in L.A. were hard. I didn’t know anybody. You don’t meet people going on auditions, because everyone is competing. So it’s not like you’re gonna be like, ‘Hey, what are you doing later? You wanna grab lunch?’ So it was just me and [mom] Nancy. We watched a lot of Golden Girls, and we made dream journals and read The Artist’s Way.”

What do you think: Is Katherine Heigl just misunderstood?