Brooke Mueller will fight the assault and drug charges pending against her in Aspen — and they won’t affect her custody arrangement with Charlie Sheen. 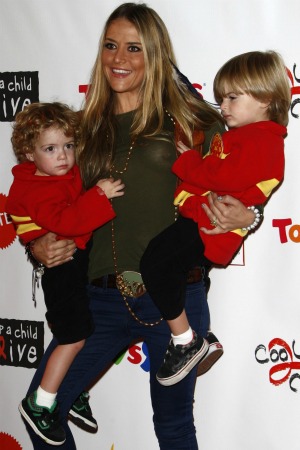 Repeat rehab attendee Brooke Mueller was busted for cocaine possession in Aspen over the weekend — but her rep says she will fight the charges.

Mueller, the most recent ex-wife of Charlie Sheen, was arrested on drug charges after cops nabbed her for allegedly assaulting a woman in an Aspen nightclub.

She was bailed out of jail by Sheen, the father of her twin boys Max and Bob — ironic considering she sent Sheen to that very same jail nearly two years ago for assaulting her on Christmas night.

“Brooke is back home in Los Angeles spending quiet time with her children. She has retained her longtime attorney Yale Galanter, who is currently in Aspen investigating the case,” said Mueller’s spokesperson Steve Honig.

“Mr. Galanter will vigorously defend Brooke with the goal of having all charges dropped once the facts of the case come to light.”

As far as the arrest starting a new custody battle between Mueller and Sheen, Honig says that just is not going to happen.

“Contrary to reports in the media, there will be no changes in the custody arrangement; the children are remaining with Brooke. Both Charlie and Brooke’s mother have offered to support Brooke in any way they can.”

Mueller’s arrest is just the latest twist in her downward spiral. She has been in and out of rehab several times and was even kicked off of a vacation with Sheen and his two goddesses for her lack of sobriety, which is pretty hardcore considering Sheen’s habits.