A California neighborhood got quite a shock when the TV show MythBusters accidentally shot a cannonball into nearby homes. 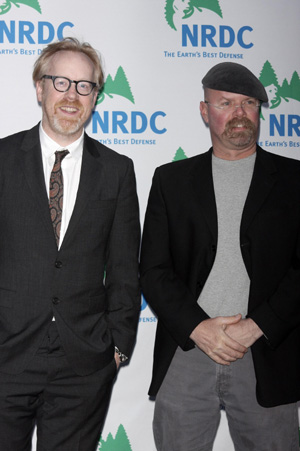 The Discovery channel‘s MythBusters show made one California neighborhood feel like they were under attack when they accidentally shot a cannonball that bounced into several homes.

What myth were they trying to bust with this act? They were attempting to see if other materials could be fired out of a cannon and still be as effective as a cannonball.

“This cannonball was supposed to go through several barrels of water and through a cinder block, and then ultimately into the side of the hill,” said Sgt. J.D. Nelson from the Alameda Co. Sheriff’s Dept.

The San Francisco Chronicle reports the cannonball missed the barrels of water and busted through the cinder-block wall, where it rolled down the hillside into the Tassajara Creek neighborhood, where kids were returning home from school.

The cannonball busted though the front of one home, went through the front door, bounced up the stairs and busted through the bedroom wall where a man, woman and child were all sleeping! They reportedly didn’t wake up from the noise, but from the plaster dust.

The ball continued its route by crossing six lanes of traffic, busted several tiles from the roof of another home before ending its path of destruction on a Toyota Sienna minivan.

Jasbir Gill is the owner of the minivan and said he pulled up about 10 minutes earlier with his 13-year-old son.

“It’s shocking — anything could have happened,” Gill told reporters. Other neighbors said they thought it was a “meteor” or a falling tree.

Luckily, no one was injured in the accident and Nelson said that the show was “tremendously lucky that it didn’t seriously injure or kill somebody.”

Neighbors said MythBusters, which is hosted by Adam Savage and Jamie Hyneman, tests many of their experiments nearby so they are used to the sound of explosions, however the show has been put on hold while they are conducting a full investigation.