Hilary Swank says that whole messy business with the President of Chechnya really wasn’t her fault. Read on to see why.

Related story Hilary Swank Secretly Got Married, & You Bet Mariska Hargitay Was by Her Side 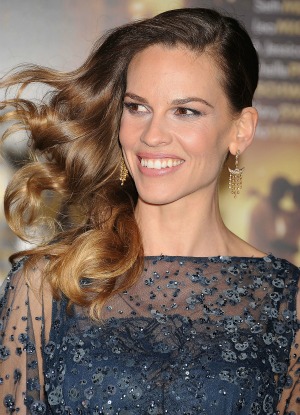 Stars can get paid a pretty penny to show up at a party and Hilary Swank is no different. The problem is that sometimes those parties are a very bad idea, as the Oscar winner found out when it came to light that the party Swank attended was a thinly-veiled birthday bash/propaganda celebration for controversial Chechen President Ramzan Kadyrov.

The New Year’s Eve star tried to do damage control by firing her reps — after she herself was dumped by her PR firm — but she is still smarting over the error in judgment. She explained how it all went down to Gotham magazine.

“In this case, a Turkish real estate company invited me to help promote peace by celebrating the rebuilding of a war-torn city and meeting people who were rebuilding their lives,” she told the mag.

“That’s how it was presented to me and I thought, ‘Absolutely, yes.’ When I was there, I was asked to wish the president a happy birthday and I did.”

As for the claim by the Human Rights Foundation that they warned Swank that the prez is a nasty dude, she says those words never reached her.

“Shame on me for not having researched the trip more fully, but I didn’t know President Kadyrov’s record. Human rights organizations had tried to warn me, but those warnings weren’t shared with me. The things that have been written about me in the press are painful because they are totally contradictory to who I am. It’s on me for having gone and I regret it.

“Believe me, I’m never again accepting an invitation before making sure I have all the information I need.”

Tell us: Is Hilary Swank truly contrite or passing the buck?