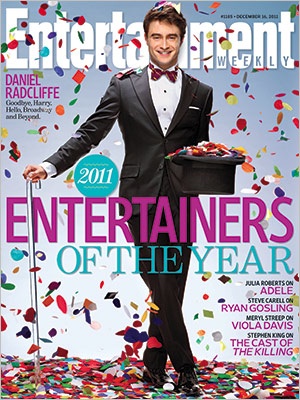 It’s that special time again! Entertainment Weekly is releasing their annual Entertainers of the Year issue. This edition includes the biggest stars of 2011 including Adele, Hugh Jackman and top dog Daniel Radcliffe.

Radcliffe earned the coveted title of Entertainer of the Year thanks to the epic conclusion of the Harry Potter franchise, as well as his Broadway run in How to Succeed in Business Without Really Trying. After growing up in front of our eyes, the actor’s ready to tackle the next phase of his career. Radcliffe will appear in the upcoming thriller The Woman in Black, where he plays a young lawyer haunted by a ghostly client. The film opens in theaters Feb. 3.

EW’s Entertainers of the Year issue highlights “the most talented and original performers.” And the magazine came up with over 17 people and groups who fit that description. In an attempt to mix things up, EW roped in other celebrities and asked who they thought should make the list. Oscar-winner Julia Roberts revealed her love for Adele and her groundbreaking album 21, while Meryl Streep gushed over The Help star Viola Davis.

Former Entertainer of the Year (2009) Sandra Bullock nominated South Park creators Matt Stone and Trey Parker for their brave jump to Broadway. “I went and saw The Book of Mormon on Broadway and was so offended I peed my pants twice,” says Bullock. “Maybe three times. I lost count I was so offended.”

Other standout stars include the cast of the breakout comedy Bridesmaids, Ryan Gosling and Game of Thrones author George R.R. Martin.

You can see the rest of EW’s picks when their Entertainers of the Year issue hits stores Dec. 9.