It looks like someone found her “very sweet sex-starved man!” Irish singing star Sinead O’Connor — a three-time divorcee — hopes four is her lucky number as she prepares to marry therapist Barry Herridge. The couple will to tie the knot in a quiet ceremony on Thursday, which is also O’Connor’s birthday. 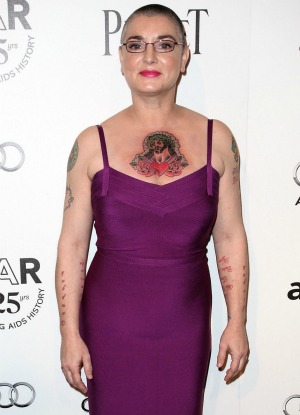 The “Nothing Compares 2 U” singer hit her personal blog on Wednesday to announce that she’ll say “I do” to beau Barry Herridge on Thursday — which just happens to be the star’s 45th birthday.

“With enormous joy myself and my beloved boyfriend Barry Herridge will be getting married tomorrow, Dec. 8 2011 at ‘an un-disclosed location’ in my absolute dream wedding ceremony,” O’Connor wrote Wednesday.

She added: “We will post a photo or two here on the site as soon as possible afterward. Very happy girl. : ):

The marriage will be the fourth for the Irish-born ’80s hitmaker, who is also the mother of four.

Irish glossies describe Herridge as a “children’s addiction counselor.” No word, however, on the particulars of how the couple met.

Sinead was seemingly single as recently as August. That’s when the outspoken musician penned a racy blog launching a search for a “very sweet sex-starved man.”

But it wouldn’t be the last time online media would get the outspoken Sinead into the headlines.

In September, fans became concerned for the safety of the “I Want Your (Hands on Me)” songstress after she posted a series of suicidal messages on her now-defunct Twitter page.

Sinead later assured fans she had no plans to take her own life and wrote an open letter discouraging suicide.

In news that should surprise absolutely no one, Sinead has been diagnosed with bipolar disorder.