Landing a cleavage-baring cover on the January issue of Maxim is the best thing to happen to Jenni “JWoww” Farley since spray tans and hair extensions! 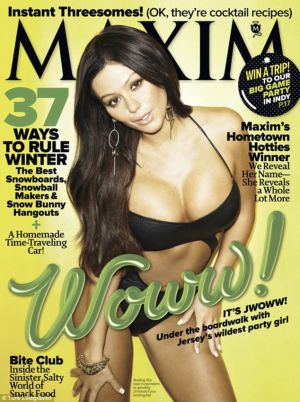 Wow, indeed: Jersey Shore star Jenni “JWoww” Farley shows off her ample assets on the cover of the January 2012 issue of Maxim magazine.

As die-hard Shoresters will attest, perfecting her tan is one of Jenni’s favorite pastimes. (It’s second only to “smushing” and drinking herself into a stupor.) Now the controversial reality personality is showing off the results in a new swimsuit photo shoot with the popular men’s mag.

JWoww, 25, was moved to tears when she learned she’d landed the Maxim cover.

“I cried when I found out. I was jumping up and down and totally bugging out. This is probably my highest accomplishment.”

And you thought completing a doctorate was something to boast about!

After a season of debauchery in Italy, JWoww, Sammi, The Situation and the rest of the vodka-soaked gang from Seaside Heights will head back to their old Garden State stomping ground when Jersey Shore returns for a fifth season on MTV Jan. 5.

“I’m glad we’re going back to the Shore now, because Italy was hard,” Jenni says.

“You could put us anywhere and we’d make a great show. But Italy was an especially amazing place for me, because I was an art history student. And besides the statues, I got to see the streets where, like, da Vinci and Michelangelo lived.”

What’s next for Jenni?

The still-untitled series will feature the self-professed “guidettes” doing what they do best — wreaking havoc on unsuspecting sleepy communities to the glee of reality fans. Snooks and Jenni recently began filming scenes for a pilot in Farley’s hometown of Long Island, New York.

According to Jenni, the companion series has “Ratings Bonanza” written all over it. And she’s already working on a few plotlines, “…I hope we go on a road trip.”