Is Usher on drugs? His ex thinks so. A custody battle between Usher and his former wife Tameka Foster Raymond has taken a turn for Nastytown. (That’s one stop past Splitsville, in case you were wondering.) The celebrity stylist is accusing Justin Bieber’s mentor of abusing drugs and neglecting his kids. Will Usher be stripped of his custodial rights? 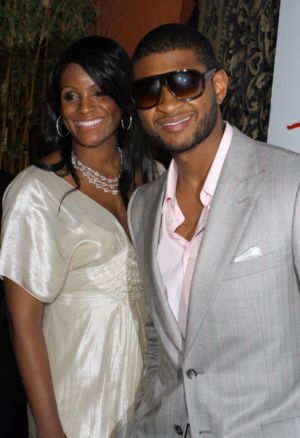 Last week, Tameka filed a petition with the Family Court Division in Fulton County, Georgia to get sole custody of the former couple’s two young sons, Usher V and Naviyd. At the heart of her claim is the accusation that the “OMG” hitmaker is a lousy father who owes her heaps of cash in back child support.

Oh — and he allegedly does drugs, too.

The Atlanta-based celebrity stylist, 40, is demanding Usher take a drug test, to prove his innocence.

“I really feel strongly that something was going on there and it wasn’t: ‘Oh, I have laryngitis.’ I believe he gets high. And if he doesn’t then he’d take the drug test, right?”

The exes currently share joint custody, but Tameka claims her former flame isn’t fit to be a dad because he likes to party. She also says she has proof in the form of a video of the star “in delirium” during a concert last January.

But Usher won’t just “let it burn.” He’s hit back at his baby mama, saying her drug test request is “frivolous and unfounded” and is a blatant attempt to “harass and embarrass” him.

The exes met when the then-twenty-something singing star was climbing the charts and the decade-older Tameka was a married mother of three. A clandestine affair ultimately led to wedding bells. But the union would be steeped in controversy almost from the start.

Foster was accused of driving a wedge between Usher, his fans and even his own mother. Their problems were compounded when Foster nearly died during a botched plastic surgery procedure in Brazil.

The Raymonds divorced in 2009.

The split prompted a career resurgence for Usher. The Bieber mentor topped the charts with the release of his platinum-selling Raymond v. Raymond disc last year.

A hearing on the custody matter has not yet been scheduled.