Lindsay Lohan is headed to The Ellen DeGeneres Show for one very specific reason — to debut her Playboy pictures! Isn’t that a little risque for daytime television? 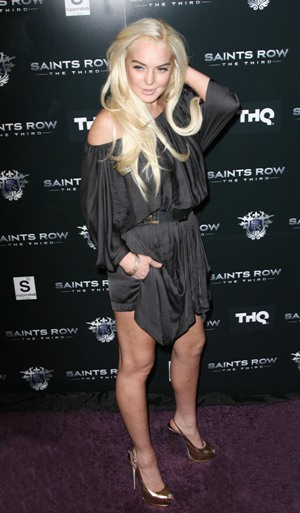 Lindsay Lohan on Ellen? Word has it the troubled starlet is making the peculiar choice to visit daytime television to debut her Playboy magazine photos!

The nude photos, which Hugh Hefner revealed are a “classic tribute” to Marilyn Monroe, reportedly set the Playboy mogul back $1 million.

A representative for Playboy revealed the Lindsay Lohan on Ellen plans saying, “Lindsay has agreed to do one media interview during the on-sale period of her issue, and has chosen Ellen. Lindsay will not be doing any additional interviews to promote her pictorial.”

They rep continued to describe Lindsay Lohan’s Playboy photos saying, “It’s a classic tribute inspired by the original Tom Kelly nude pictorial of Marilyn Monroe, a portion of which was the original playmate in the very first issue of Playboy. Oh, yes, she’s naked. And classy, very classy.”

The 25-year-old, who recently spent only a handful of hours in jail for a 30-day sentence, posed for the photos in early November. Rumor has it one of Lindsay Lohan’s Playboy photos may land the cover of the magazine’s January issue. An insider commented previously, “There is never a guarantee that everyone will like the photos or that they will be of high enough quality to use for the cover but Playboy wanted to make sure that Lindsay’s pictures were exactly what they wanted.”

A rep for Lindsay Lohan said of the photos, “The pictorial is absolutely fantastic and very tasteful, and will be accompanied by an interview that will let readers see another side of Lindsay.”

The episode of Lindsay Lohan on Ellen is scheduled to air Dec. 15.

Do you approve of Ellen including Lindsay Lohan’s Playboy photos on daytime television?