Now that the real Emily Thorne is making herself cozy in the Hamptons, will everything fake Emily has been working for go up in flames? Keep reading for a preview of this week’s Revenge.

Loyalties will be tested on Revenge this week, as the battle to neutralize Tyler heats up and the real Emily Thorne settles into the past life of Amanda Clarke (Emily Vancamp). 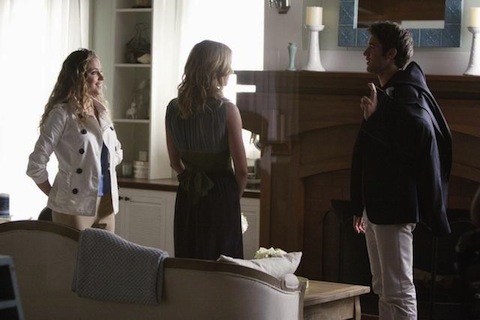 On this week’s new episode of Revenge, “Loyalty,” Fake Emily begins to doubt Nolan’s commitment to the plan when she stumbles upon a “secret” he’s been keeping.

She’s always got a plan, however, and will use the information in her fight against Tyler, which could unleash a “dangerous” side to the frat boy we haven’t seen yet.

Elsewhere, fake Amanda begins settling into the real Amanda’s old life as news of her arrival begins to make its way through town.

Victoria will also take back power that she lost.

Check out a preview of “Loyalty,” then head back to ABC on Wednesday night for the full episode…

ABC officially describes “Loyalty” as the following: “Emily questions Nolan’s loyalty when she discovers a secret of his, but eventually uses it to her advantage in her battle against Tyler. Unfortunately, it sets in motion a chain of events that prove just how dangerous Tyler is. Meanwhile, Amanda makes herself more comfortable in the Hamptons as word of her presence spreads. Victoria regains some power, and things get very ugly between her and Conrad, on “Revenge,” Wednesday, Dec. 7 (10:00-11:00 p.m., ET), on the ABC Television Network.”

We want to hear your thoughts on the real Emily Thorne — do you think she’s going to end up a victim or survive the remainder of the season?

What about Tyler? Are his days numbered on Revenge?

Head over to our comments section and sound off! How do you like your revenge?