Alec Baldwin is staying in Los Angeles a bit longer than expected — he was kicked off an American Airlines flight for refusing to turn off his phone. 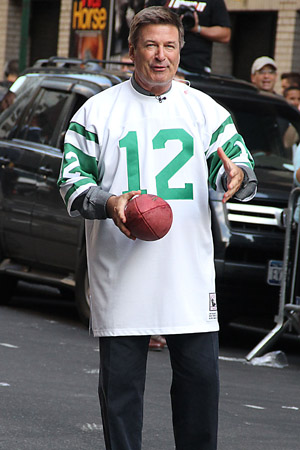 Alec Baldwin isn’t really known for his overly-friendly personality. The actor is known to speak his mind, both in real life and over Twitter, without worrying what people think about him.

Well, it looks like his penchant for arguing caught up with him Tuesday afternoon — the 30 Rock star was kicked off an American Airlines flight out of Los Angeles after he refused to stop playing an iPhone game.

“Flight attendant on American reamed me out 4 playing WORDS W FRIENDS while we sat at the gate, not moving. #nowonderamericaairisbankrupt,” he tweeted after being removed from the flight.

News of Baldwin‘s departure came fast and furious from fellow passengers aboard the plane.

“On an AA flight at LAX. Alec Baldwin removed from the plane We had to go back to the gate. Terrible that everyone had to wait,” former MTV Networks president Michael J. Wolfe tweeted.

Another passenger made a joke out of it.

“#Alec Baldwin is getting kicked off of AA flight as I tweet this!” author Grant Cardone tweeted. The reason? “Didn’t have his Capitol One Card and Abusive to attendant is what I was told by AA authority,” he joked, referring to Baldwin’s endorsement deal with Capital One.

This isn’t the first time Baldwin has used Twitter to spew insults. The Schweddy Balls-loving actor got into an altercation with a Manhattan Starbucks employee during the late summer and tweeted about it.

“Starbucks on 93 and B”way. Uptight Queen barrista named JAY has an attitude problem,” he tweeted.

Starbucks employees told the New York Post that it was because Baldwin was being a diva.

“I was here when it happened — it was really just him being an [expletive],” an employee told the Post.   “[Baldwin] was very rude and disrespectful and arrogant. He’s probably the rudest guy I’ve ever met.”

Baldwin has a good attitude about the American Airlines snafu, though.

Do you think Alec Baldwin should have been kicked off the plane?