Jack Bauer is going back to work. Twentieth Century Fox has kick-started plans for their film adaptation of 24. After several production delays, the long-awaited movie is finally back on track. 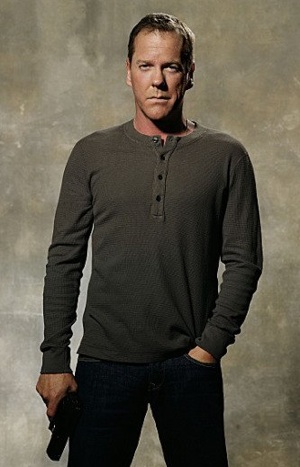 Tick-tock goes the clock for the canceled TV series 24. The award-winning drama ended its eight season run in 2010, but will be reborn on the big screen. Headliner Kiefer Sutherland will reprise his role as government operative Jack Bauer, who’ll once again protect our national security.

According to Deadline, Mark Bomback is currently tweaking the 24 script, which was originally written by Billy Ray. He’s expected to turn in the finished product to Fox by the end of the year.

If everything goes according to plan, 24 will go into production sometime next spring. Preferably after April, when Sutherland’s work schedule opens up. The film version of 24 will feature a slightly altered take on the show’s famous hour-by-hour format.

Last year, Sutherland told Britain’s Sky Magazine that the film would “be a two-hour representation of a 24-hour day.”

He continued, “With the TV show we always had to have the crisis come to us because we couldn’t move. Twice we put Jack on a plane and it was a disaster. This will be different — it will be very feasible to get from Eastern Europe to England in the course of 24 hours.”

Until the production begins, Sutherland has plenty of work to keep him busy. He’s currently filming the thriller The Reluctant Fundamentalist, which centers on a Pakistani Wall Street broker as he deals with the aftermath of the 9/11 terrorist attacks. The actor’s also shooting a new TV series for Fox called Touch from creator Tim Kring (Heroes). It co-stars Danny Glover and Gugu Mbatha–Raw and follows a man whose young, mute son can predict the future.