Kristin Chenoweth and Trace Adkins’ hosting duties made for a case of tall meets small at the American Country Music awards Monday night! 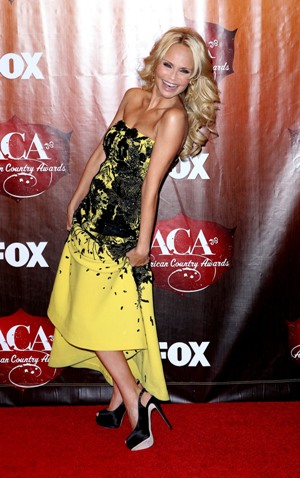 Kristin Chenoweth had heads turning and jaws dropping in a cleavage-baring dress at the American Country Awards Monday night. Check out a picture of the emerald green gown that is now the talk of the town below!

Kristin Chenoweth may be most well-known as an actress, but music with a touch of twang also holds a special place in her life. She said recently, “I know that some people see me in different things: I’m known for RV, West Wing, Pushing Daisies, Broadway, Wicked, it’s kind of always different. But I hope what they learn about me …is, yes, I’m a trained opera singer and, yes, I’ve done Broadway, but country music is also in my heart.”

Before the show, the pint-sized star joked of looking up to Trace Adkins, “I’ll just let y’all know if he’s clipped his nose hairs.”

On-stage during the American Country Awards, held in Las Vegas, the 43-year-old challenged her co-host to a sing-off. Wearing an obnoxiously padded behind reminiscent of Kim Kardashian’s famous booty, Kristin Chenoweth rose to the challenge of singing Trace Adkins’ “Honky Tonk Badonkadonk.”

After the show Chenoweth tweeted to her fans, “Goodnight all! I had so much fun with @traceadkins. I love u honey! Congrats ACA winners and nominees!” Moments later she added, “I had fun!!!! Wahooooooo.”

Tuesday, as attention turned to Kristin Chenoweth’s cleavage-baring dress, one Twitter follower bluntly asked her “did u get a boob job??” Kristen Chenoweth promptly replied, “NO!!!!!” 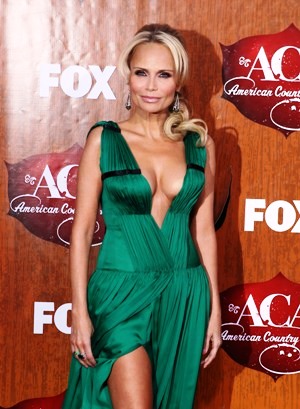 What do you think of Kristin Chenoweth’s cleavage baring ACA dress?