He’s still going strong at 78, but TV icon Larry King already has plans for the afterlife. And we aren’t talking about his eulogy! Listen as the former host of CNN’s Larry King Live explains why he wants his remains frozen after he dies. 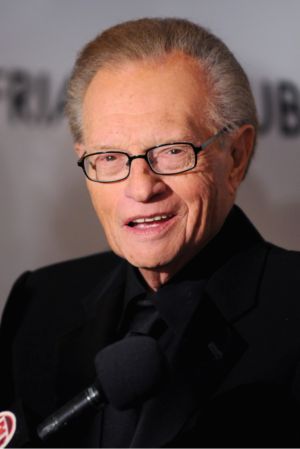 Just one of the little morsels of news that came out of Sunday night’s CNN special, Dinner with the Kings: Larry King wants to be frozen after he takes a dirt nap.

But it was MacFarlane who got the real scoop when he quizzed King about whether he was “maybe a little obsessed” with his own mortality. It’s an accusation that Larry didn’t exactly deny.

“Oh, I fear death,” the 78-year-old replied. “My biggest fear is death, because I don’t think I’m going anywhere. And since I don’t think that and I don’t have a belief… I’m married to someone who has the belief, so she knows she’s going somewhere.”

King said that when he dies, “I want to be frozen, on the hope that they’ll find whatever I died of and they’ll bring me back.”

“This is big news,” O’Brien remarked. “You would like to be frozen? This is news to me.”

“It’s the only hedging of a bet,” King answered.

Larry plans aren’t as “Outer Limits-esque” as Seth would believe. See, the bespectacled King of Suspenders is a subscriber of cryonics. It’s the practice of preserving expired humans and animals at extremely low temperatures, with the hope that healing and resuscitation may be possible in the future.

In fact, Larry isn’t the only celeb hoping a thorough freezing and advances in modern medicine will give him a second lease on life — someday. In 2009, Simon Cowell confessed that he too plans to do the world an “invaluable service” by having his body frozen upon his demise.

After his death, the acid-tongued X Factor mogul hopes he’ll one day be brought back to life to torment aspiring singers with even more heavy-handed criticism. At a private dinner hosted by former British Prime Minister Gordon Brown, Simon told guests he plans to have his body preserved in liquid nitrogen.

“I have decided to freeze myself when I die,” Cowell confided.

“You know, cryonics. You pay a lot of money and you get stuck in a deep freeze once you’ve been declared dead. Medical science is bound to work out a way of bringing us back to life in the next century or so and I want to be available when they do. I would be doing the nation an invaluable service.”