Amanda Knox, the American coed convicted and later cleared of murder charges in Italy, wants to bring her story about the pursuit of justice in a foreign land to the shelves of a bookseller near you. 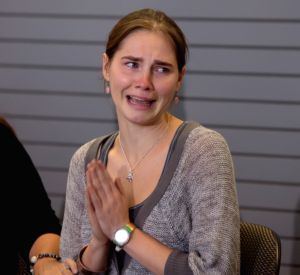 Amanda Knox is trying to land a book deal.

Knox is the former foreign exchange student who was condemned to spend more than a quarter century in an Italian prison before her murder conviction was overturned on appeal this fall. Her story was the subject of a controversial 2010 Lifetime Original Movie, starring Hayden Panettiere.

Literary experts have suggested that Knox — nicknamed “Foxy Knoxy” by the Italian press — could command a seven-figure book deal as publishers compete to bring her biography to print.

Knox, her Italian boyfriend Raffaele Sollecito and an African-born drifter named Rudy Guede were convicted in the 2007 slaying. Amanda slashed her friend’s throat with a knife during a violent night fueled by sex and drugs, prosecutors argued at trial.

The case made international headlines amid the outcry that faulty DNA evidence and police misconduct played a role in the convictions of Knox and Sollecito — whose conviction was also overturned as part of the landmark October decision.

Knox returned to her family’s home in Seattle, Washington following her successful appeal. She has granted no interviews since being released from prison.